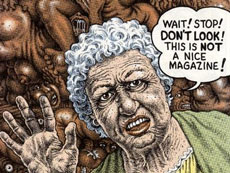 Weirdo was a magazine started by R. Crumb, which featured Crumb’s work alongside that of a number of other underground-type comics creators. Crumb’s work from Weirdo’s 28 issues has just been collected as R. Crumb: The Weirdo Years, 1981-’93, released in the U.S. by Last Gasp. It features an astonishing variety of comics work, from Crumb rants and confessionals to a 1906 psychiatric report on sexual deviancy, fumetti, parodies, and more. This is a book that Deconstructing Comics can’t help but review, so this week Kumar and Tim do their podcasting duty!