This week the crew is all here! And they discuss: Elmer Fudd huntin’ Bats, Jay Garrick returning to Flash and Batman, Jamie Chung gets her Blink on, Apes Director Matt Reeves takes a stab at Batfleck, Hart of Dixie actor becomes Black Lightning, X-Men Pilot gets some True Blood, and more!

Plus Worst Pick, and The Top 5 comics of this week, Most Anticipated 3 comics for next week, let your voice be heard in our weekly poll https://goo.gl/r1mZnv and more!

Comic News Insider: Episode 564 is now available for free download! Click on the link or get it through iTunes! Sponsored by Dynamic Forces.

Jimmy is joined in studio by frequent co-host Emily Edwards and boy do they have a lot to chat about. SO many reviews! They briefly talk about the Emmys, CNI gets covered on The Beat and a reminder to give to Seth Kushner’s GoFundMe campaign. News includes: Donald Glover is finally Spider-Man, Dancing Groot toy grooving towards market, Action Comics #1 goes for over $3 million in auction, Lois Lane gets into the YA game and NYCC debuts Eastern Championships of Cosplay. Leave your iTunes comments! 5 stars and nothing but love!

Comic News Insider: Episode 548 is now available for free download! Click on the link or get it through iTunes! Sponsored by Dynamic Forces.

Comic News Insider: Episode 500 is now available for free download! Click on the link or get it through iTunes! Sponsored by Dynamic Forces.

It’s the epic 500th episode recording and we do it live with an audience at The Hourglass Tavern (373 w. 46th St.) in New York City! We’ve sang for years and have teased a musical since 2005…and this will be the closest you’ll get. Many a musical number and so many special guests! Michael Emerson (Person of Interest, Lost), Carrie Preston (True Blood, The Good Wife), Veronica Taylor (Pokemon), Kevin Maguire (Justice League), ChrisCross (Bloodshot, Katana), Rafael Kayanan (NCIS: LA, Conan), Simon Fraser (Nikolai Dante), Michelle Mozes (Blue Streak), Qui Nguyen (Vampire Cowboys Theatre Co.), and Heidi MacDonald (The Beat). News includes: lightsabers are going to be real, Marvel teases many new titles to be announced at NYCC, DC based TV shows Gotham andConstantine are on the way and Dynamite Entertainment launches toys/games line. The CNI chorus (Patrick Garrigan, Salli Garrigan, Amy Wolk, Kristen French and Erick Pinnick) opens the show with a rocking tune. Jimmy and Kristen sing a duet as Ben Affleck and Jennifer Garner, a special voice mail from Avengers 2, and Jimmy almost spoils Breaking Bad in song. Many thanks to the rotating co-hosts Erica Schultz (the Podcast Wife), Emily Edwards and Kristin Garay. Of course, none of this would be possible without Producer Joe Gonzalez running everything. As always, listener feedback, Top 3 and more. Leave your iTunes comments! 5 stars and nothing but love!

Golly! Is that the time already?! The time where I have nothing witty or clever to say which doesn’t really matter because no-one reads the liner notes anyways?

YES! That very same time! Let’s get to it…

Talking about our time spent at Apocalypse University

Huge shoutouts  to friends and comrades:

The Pod with no Name

–          G Money tries to answer a very long X Men/Avengers questions in under a minute!

–          Obscene money being spent in the Premier League transfer window

A short one on deck today peeps as G Money is ever popular and needed to skedaddle early. We still managed to pack quite a bit in though…

Evil wishes upon each other

What’s going on in Brazil

Pounds and Quids – Is there a difference?

Selma Blair leaves Anger Management and generally no f*cks given

Dublin is NOT a fan of Rhianna (but who is?)

Masterchef is OFFICIALLY out of ideas!

DON’T UPDATE YOUR PLAYSTATION! (YET!)

Tom Taylor bumped up to write current and future Earth 2

Bruce Timm could possibly be ‘defecting’ to Marvel

Game releases for the week

Comic News Insider: Episode 432 is now available for free download! Click on the link or get it through iTunes! Sponsored by Dynamic Forces.

Jimmy is joined in studio by famed vloggers/comedians/life coaches/newly engaged couple Michelle Vargas and Justin Akin! They chat about the Doctor Who screening and interviews they attended last week.  Well, Jimmy did the interviews with stars Matt Smith and Karen Gillan along with executive producer Caroline Skinner which you’ll hear throughout this episode. Michelle attended the screening of the first episode (airing this Saturday on BBC America). Fret not. NO SPOILERS.  News includes: Superman and Wonder Woman get it on, new Justice League of America comic book coming, Rob Liefeld quits DC/goes on Twitter rant about it and a new Star Wars animated TV series called Detours is coming from the makers of Robot Chicken. As always, listener feedback, Top 3 and more! Leave your iTunes comments! 5 stars and nothing but love!

Comic News Insider: Episode 388 is now available for free download! Click on the link or get it through iTunes! Sponsored by Dynamic Forces.

Jimmy is joined in studio by Marvel’s The Watcher host (and good pal) Lorraine Cink! They discuss her show, the Oscars, UK’s Being Human, JK Rowling’s new book, and Justice League: Doom. News includes: Lots from Image Expo like Brian Wood/Ming Doyle’s Mara, Phonogramreturns, The Walking Dead gets their Governor, Moriarity the musical, Happy!, Bedlam, and Jonathan Hickman’s The Manhattan Projects and Secret. Other news: Morgan Spurlock’s Comic-Con Documentary is finally coming, Valiant debuts a talking comic book cover, Alan Ball is leaving True Blood, and a rare comic book collection sells for $3.5 million. Massive apologies for the LOUD pipe banging at the end of the episode. NYC buildings just love doing that at times. As always, listener feedback, the Top 3 and more! Leave your iTunes comments! 5 stars and nothing but love!

Comic News Insider: Episode 377 is now available for free download! Click on the link or get it through iTunes! Sponsored by Dynamic Forces.

Jimmy is joined in studio by old CNI stalwarts Kevin Conn and Jon Hoche as well as first timer Lorraine Cink. She’s a hilarious, nerdy and adorable lady who does improv with our palGrace Helbig. The drinks flow heavy (yet again) and the show goes off the rails early just like you like it! Jimmy and Lorraine sing about their new year’s eve, they all discuss the Russian Avengers and the Upside Down trailers and try to figure out what the big deal is with Wonder Woman onHarry’s Law. News includes: DC finally reveals their mystery woman, Bryan Hitch and Jonathan Ross announce their new series, St. Trinian’s creator Ronald Searle dies, Marvel lawyers claim mutants are NOT humans, and a sci-fi brothel is beaming into Nevada. Plus, the CNI Hotline is very busy with calls of (what we thought were congratulations and wishes of a happy new year) confusion and outright annoyance. Calling in are pals “Arlene Fowler” (True Blood), Michael Emerson (Person of Interest),  Jonathan Ross (UK chat show host), Sara Cox (BBC Radio 1 DJ/personality), Blair Herter (G4TV’s X-Play), Kelly Sue DeConnick (Osborn, Castle: Deadly Storm) & Matt Fraction (Casanova, Iron Man). As always, listener feedback, the Top 3 and more! Leave your iTunes comments! 5 stars and nothing but love!

Tune in this FRIDAY for the BEST OF 2011 show where the same crew in this episode (and seen below) break down their favorite comics, TV shows, and films. It’s a fun discussion of our year’s best! And yes, even more drinking happened. 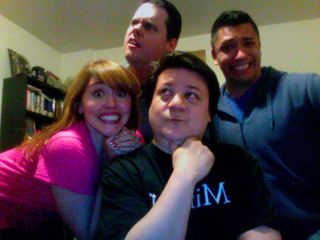 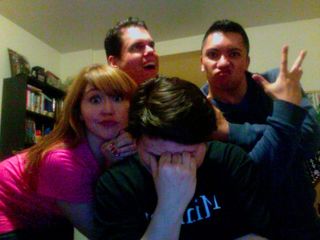 Comic News Insider: Episode 341 is now available for free download! Click on the link or get it through iTunes! Sponsored by Dynamic Forces.

Jimmy is joined by…NO ONE! Yes, in the first solo CNI ever, Jimmy delivers a quick show for your listening pleasure. And fret not, this wont be a regular thing as he knows your ears may bleed if you get too much Jimmy. He laments the passing of the great Gene Colan and briefly talks about the Game of Thrones finale and True Blood season premiere. He also gets a message from his hot 10th grade English teacher. Ooh! News includes: SpongeBob gets a mushroom, Locke & Key to screen at Comic-Con, Stan Lee/Todd McFarlane team up for new comic, all new Justice League of America unofficially announced, DC to end “write for trade” policy, and some quick TV/film news. As always, Listener Feedback, the Top 3 and more! Leave your iTunes comments! 5 stars and nothing but love!

Due to Indianna Jones-style-globe-trotting, with the red line and everything, this week’s episode is a little late but as always Gavin and Dan are on top Sidekickcast form. We actually talk about comic book matters for once with some CLiNT rundown, Alan Moore character assassination and a look at The Dark Tower adaptation.

Dan is seriously closing in on Gavin in Secrets and Lies, the comic book news quiz with a twist but can he keep it up?! The Dig This! choice this week comes from Sidekick favourite Chris Barker in the form of Blade of the Immortal vol.1. Don’t forget to listen past the outro music for our usual brand of comedy cock-ups.

In this incredibly long episode, I’m joined once again by Haley Manbat to discuss in great detail the second season of True Blood (HBO). Spoilers aplenty!

This weeks episode is “Panda Packed” as we have a conversation with Panda Dog Press founder & creator of “Animal Control: Special Creatures Unit” Rob Anderson as we discuss the creation of his comic, storytelling, licensed comics, and his involvement in the “Comics Experience,” which is headed by IDW Senior Editor Andy Schmidt.

Then we go all out as we discuss the “Panda Force Summer Shorts” webcomics with “Panda Force” creator Sean Causley & the Glyph Nominated artist Julian Lytle, creator of “Ants.” Get familiar as we go all out and discuss their comics, webcomics, the end of Zuda, Doctor Who Anime, the fall of radio, Rick Ross, “The Expendettes” and a few comics that we think would fly off shelves but the big two would never publish.