This week the Two Guys with PhDs discuss three very different titles. They begin with Steven Tillotson’s Untitled Ape’s Epic Adventure (Avery Hill Publishing), a different kind of quest narrative that blends the anthropomorphic and the surreal. After that, they look at Phil Hester and Tony Harris’s Blood Blister #1, the latest serial offering from AfterShock Comics. And finally, Andy and Derek wrap up with The Belfry (Image Comics), a one-shot horror title from Gabriel Hardman.

A proud member of the Comics Podcast Network

On this podcast we review Chin Music #1. What just happened? Then it’s an impromptu chat about The Walking Dead #110. And to finish, we discuss The Amazing Spider-Man 2, Agents of S.H.I.E.L.D., Captain America: The Winter Soldier, Man of Steel and Avengers 2 movie news. Listen in and enjoy!

Are you committed to a full season of Marvel’s Agents of S.H.I.E.L.D.? Head over to our podcast Facebook page and let us know. 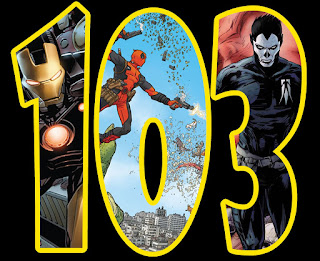 Alright CBPeeps, get ready to have your minds blown.

– This month marks CBP’s 4 year anniversary.
– Starting this week, CBP is going back to a weekly schedule.
– Last, but certainly not least, our friend Jared Catherine officially joins us in this episode as a co-host.

We’re glad to have another voice on the show because we had a lot of stuff to talk about, like…

We also devote a few minutes at the end of the show to mention Tony Harris’ recent online rant. It’s a doozy.

Also, if you’re in the Pittsburgh area next Saturday, check out the one-day only steampunk show, Airship Pirate Days

In this episode of the Dollar Bin Adam and Shawn discuss their experience of Baltimore Comic Convention 2010.  This show is broken up into 3-ish parts:  Pre Convention, Post Convention, and Interviews (not particularly in that order).  Topics of discussion include Steve Niles, Doug Wagner, lines, Francesco Francavila, Tony Harris, the Fillbach Brothers, Jim Shooter, Curls Studio, Richard Thompson, Jason Horn, and a butt load more.

The boys are back and talking movies, comics, and dick troubles. On this episode you will learn who uses the cheapest binder of all the comic companies, what game not to play with a two year old, and why the Nightmare on Elm Street remake is not as horrible as others are making it out to be. In a piece of audio recorded outside the comic shop last saturday, Kev and TJ are joined by the Helboundinc boys as well as Vaughn from Motion Picture Massacre to discuss Nightmare, as well as film remakes in general. Then it is All DC Comics all the time with discussions on War of the Supermen 0 & 1, Brave and the Bold 33, House of Mystery, Garrison #1,  Batgirl 9. Some non-DC stuff is thrown in too with Spawn 197 and The Pilgrim 1.

Get it on iTunes, http://www.fbombcast.com, or right here

Batman, Captain America, and the Super Young Team made this week jam-packed with awesomeness!

Can I get some rest now? Even coffee can’t keep me awake at this point.

The Great Machine, Barbarians, and Spider-Man in the Great Depression truly make this week fun for one and all!