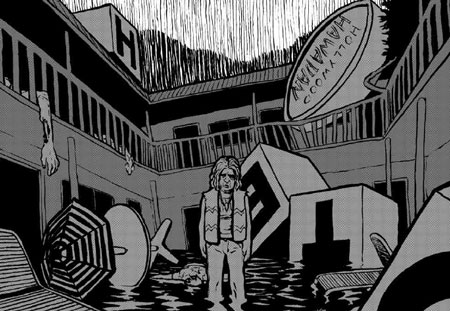 A music star on a downward spiral is experiencing strange visions. It seems that everything he knows is wrong. What’s real and what’s not? Tim and Mulele discuss Eric by Tom Manning.

44:36: The saga of Mulele’s TCAF box reaches its denouement.

On this interview episode, Derek talks with Tom Manning, whose most recent work, Runoff, was released late last year from One Peace Books. They discuss the genesis of the project — how it began as a self-published serial and then eventually evolved into a massive 450-page tome — and its ambitious scope. Tom describes it as a mashup of genres and styles where he wanted to exploit the full range of the comics medium. Runoff is a horror sci-fi mystery set in small Washington state town resembling the one that Tom grew up in, and it’s equal parts dark, humorous, and head-scratchingly confounding. Manning employs an ensemble cast of eccentrics, reminiscent of Berke Breathed’s Bloom County, but who reside within a Lovecraftian landscape. Indeed, the cthulhu of this narrative is an enigmatic floating obelisk or headstone-looking entity with moe type eyes. And if that’s not disturbing enough, you have a vigilante group of monsters by way of the Universal lot, but whose zombie member is a polite soul who goes by the name of Mr. Pickles. Ghosts become a central part of the narrative, and these spirits exercise their right to vote. And then there’s the inter-dimensional bleeding — Edwin A. Abbott, anyone? — that turns into an inter-dimensional feeding. If this sounds like a weird, whacked-out comic, that’s because it is, a style that Tom describes as “gothic American surrealism.” As he explains to Derek, he wanted to see where his story would go, what narrative tributaries carried him to the most interesting effects, and the result is quirky book that that could easily find its way into a Syfy series.

Learn more about Tom Manning’s work at his website.