This week Dave and Ben are left to their own devices. All alone and even with Dave sick the 2 of them soldier on to give you an entertaining episode for the week. Thet also tackle some burning questions like is it too soon for Harvey Dent to show up in Gotham? Is anyone watching Gotham? Is Stan Lee the Watcher? Who first came up with that idea? And Ben says some controversial things that possibly could spawn some nerd-on–nerd rage! Stop the madness and just listen to the episode. Enjoy! 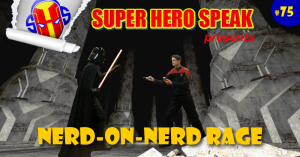 #stumpthegeekspeak question of last week:  What was the first superhero comic that Jack Kirby worked on? And who published it at the time?

And the winner is David Patterson! Congrats you are the geek of the week!

#stumpthegeekspeak question of the week: Where did the Frightful Four first appear and who was in the original line up?

The Professor from Rhymes With Geek joins us on this podcast as we review God Hates Astronauts #1, Death of Wolverine #1 and Original Sin #8. It’s a big deal. Listen in!

Can The Rock act? Head over to our podcast Facebook page and let us know.

Comic News Insider: Episode 562 is now available for free download! Click on the link or get it through iTunes! Sponsored by Dynamic Forces.

Jimmy is joined in studio by podcast wife Erica Schultz! Been too long since the podcast marriage came together and they have lots to chat about. Erica talks about her recent appearance at Boston Comic Con, Jimmy was a guest on friends Brea Grant and Zane Grant’s podcast Mystic Party (Episode 22), and they get excited over the rumored Blu-Ray release of the original unaltered Star Wars trilogy. Producer Joe jumps in to review Outlander with Jimmy as well! It’s the last of our San Diego Comic Con interviews as well and we go out with a bang of comic book goodness. Jimmy chatted with the amazing Lucy Knisley about her new work and had a great convo with awesome UK comic writers/pals Yomi Ayeni and Corey Brotherson about their latest outputs. News includes: Marvel tests the Wal-Mart waters, Valiant brings free comics and a new non-revival comic, Dustin Harbin will draw anyone for $50 and Sony’s Powers TV show casts the leads. Come back this weekend to hear the Francesco Francavilla panel that Jimmy moderated at SDCC! Leave your iTunes comments! 5 stars and nothing but love!

This week on the NEWLY DUBBED Undecideables Oddcast Jimmy, Dan and Jill talk about all sorts of nerdery including:  Captain America, Original Sin and their Top Fives.  Go put some comics in your eyeballs!

The crew returns to discuss the first four issues (including #0) of Marvel’s Original Sin!

This week, it’s Brant and John.

We discuss several Marvel headlines to kick off the show, including movie news and shake-ups in the Marvel offices.

For Topic Time, we dive into Original Sin #0-3 in depth. SPOILER WARNING! We spoil the heck out of them!

Finally, we wrap things up with some announcements and closing.

If you have comments, questions, complaints or whatever, feel free to contact us at zone4@comicrelated.com!

Poster Posse Does Guardians of the Galaxy

Adam McKay in Talks to Direct Ant-Man, Pulls Out

On this podcast we talk comics. A lot of comics. Detective Comics #27, Wolverine #13, Avengers World #1, All-New X-Factor #1 and Revolutionary War: Alpha #1. See? Then we talk some news. Listen in!

What was the best book you read last week? Head over to our podcast Facebook page and let us know.

Mmmmm! A delicious tasty start to the show (for us anyways!)

Our heat wave can counter your cold snap America!

Trying to make beating off “cool” with the kids

Cory Bernardi is here to help all the women

–          Original Sin Marvel Event involving the death of the Watcher

Comic News Insider: Episode 454 is now available for free download! Click on the link or get it through iTunes! Sponsored by Dynamic Forces.

It’s the super huge and long BEST OF 2012 show! Jimmy is joined by Marvel’s The Watcher host Lorraine Cink and good pal Mike Cho. Both are CNI vets and bring their nerdy knowledge to the podcast once again. Jimmy saw Django Unchained and Attack of the 50 Ft Cheerleader. One had lotsa violence and another had lotsa boobs. Guess which one he REALLY liked? News bits include:Axe Cop will debut on Fox’s late night animation domination in July, Guillermo del Toro is heading up a  DC comics based “Dark Universe” film, XX coming from Marvel, Adventure Time graphic novel on the way, Joseph Gordon Levitt cast in Sin City 2, Disney’s Aladdin coming to Broadway, and Disney Junior’s “A Poem is…” series recruits Doctor Who and Lady Mary Crawley. And the feature segment is our lengthy, informative and fun BEST OF 2012 picks…that we read! As always, listener feedback, Top 3 and more! Leave your iTunes comments! 5 stars and nothing but love!

Could Deadpool really kill the entire Marvel Universe? Why is Infected so familiar? Did Think Tank make you smarter?

This week on the podcast, we review Top Cow’s Think Tank #1, IDW’s Infected #1 and Marvel’s Deadpool Kills the Marvel Universe #1. Listen in and see if you agree with our spoken words!

What did you think of the three titles? Head over to our podcast Facebook page and let us know.

*And just because we mentioned it in this episode, here’s our podcast review of the Marvel Universe vs The Punisher.

Comic News Insider: Episode 388 is now available for free download! Click on the link or get it through iTunes! Sponsored by Dynamic Forces.

Jimmy is joined in studio by Marvel’s The Watcher host (and good pal) Lorraine Cink! They discuss her show, the Oscars, UK’s Being Human, JK Rowling’s new book, and Justice League: Doom. News includes: Lots from Image Expo like Brian Wood/Ming Doyle’s Mara, Phonogramreturns, The Walking Dead gets their Governor, Moriarity the musical, Happy!, Bedlam, and Jonathan Hickman’s The Manhattan Projects and Secret. Other news: Morgan Spurlock’s Comic-Con Documentary is finally coming, Valiant debuts a talking comic book cover, Alan Ball is leaving True Blood, and a rare comic book collection sells for $3.5 million. Massive apologies for the LOUD pipe banging at the end of the episode. NYC buildings just love doing that at times. As always, listener feedback, the Top 3 and more! Leave your iTunes comments! 5 stars and nothing but love!

Comic News Insider: Episode 385 is now available for free download! Click on the link or get it through iTunes! Sponsored by Dynamic Forces.

Jimmy is joined in studio by some of the Vampire Cowboys Theater crew, Jon Hoche and Qui Nguyen! They have remounted their show The Inexplicable Redemption of Agent G on the ol’ Off Broadway stage so go see it if you’re in NYC! They chat about Comic Book Men, The Walking Dead mid-season return, Abraham Lincoln: Vampire Hunter trailer, and Geek Syndicate’s new podcast Geek to Geek. Jimmy attended the red carpet premiere of the new Warner Brothers/DC animated feature Justice League: Doom at the Paley Center here in NYC. He got to chat with voice director Andrea Romano and Phil Morris and you get to hear a tease of those interviews here. A special One-Shot episode with full interviews and the post-screening Q&A will be released on Friday! News includes: Smallville Season 11 in comics, DC Nation programming block on Cartoon Network, Marvel’s The Watcher gets new host Lorraine Cink, New Mutants and Asgardians get exiled, Star Trek: TNG and Doctor Who crossover at IDW, and Course of the Force comes to Comic-Con. As always, listener feedback, the Top 3 and more! Leave your iTunes comments! 5 stars and nothing but love!

PLEASE NOTE:
This episode is a rerun that originally aired October 6th, 2008.

Hail to the Chiefs, Baby!
In this episode, The Freaks discuss the presidencies of Captain America and Superman. They also discuss the first black president and a female vice-president, but not in the way you’re thinking! Plus some patriotic words from “One Called Kirk”.