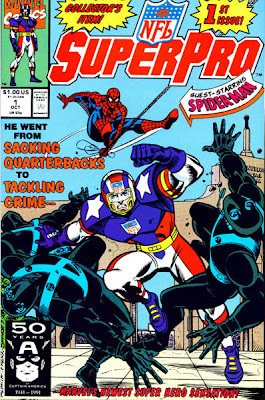 In honor of Super Bowl XLVI, I present NFL SuperPro! It has the distinction of being widely regarded as one of the worst comics ever published, including an issue that the Hopi tribe tried to get Marvel to pull from the shelves for containing both racist content and information about the Hopis that they consider sacred. According to ComicBookDB.com, The Hopi Nation found the appropriation of their religious beliefs offensive and demanded that Marvel recall the issue from the stands. According to Marvel editor Tom Brevoort, Marvel issued a formal apology to the Hopi Nation for publishing the issue.