Tim and Kumar meet in person for the first time! This calls for a podcast, but… what to review? We discuss the movie Crumb, which features not only the expected discussion of R. Crumb’s work (including an objective look at the question of whether some of the … discomfiting subjects of his work should really have been published as “art”), but also a fascinating portrait of the dysfunctional family he grew up in.

Then, Tim and Brandon clash over Sean Murphy’s Punk Rock Jesus, in which a former Irish Republican Army member acts as a bodyguard in a reality show claiming to be creating the clone of Jesus Christ. Is it objective and well-written, or a promo brochure for atheism?

Life, the Universe, and Everything

This week the Two Guys with PhDs Talking about Comics explore four new titles, each quite different one from the other. They begin with the new graphic novel from New Zealand creator Ant Sang, The Dharma Punks (Conundrum Press). On the surface it is a story about coming to terms with death, but there’s much more going on in this 415-page book. In fact, this is one of the most ambitious narratives the guys have encountered so far this year, and certainly the most philosophical. Its protagonist, Chopstick, tries to comes to grips with the suicide of a close friend and what that loss means in his own life, while at the same time participating in an anarchist act against a corporate franchise. The events in the book take place roughly over a two-day period, but one of strengths

of this narrative is how Sang manipulates time in a Faulkner-like manner, making the past ever-present. This is a rich and complex text, and at times Gene and Derek feel at a loss trying to put the gist of The Dharma Punks into words for an audio podcast. Next, the guys take on a much more constrained narrative, but one that is nonetheless multifaceted in its own ways, Noah Van Sciver’s My Hot Date (Kilgore Books). This is an autobiographical comic, and as the title suggests, it’s about a date that the fourteen-year-old Noah has with someone he met via America Online. Van Sciver has written short memoir-inspired stories in the past, but this is the longest, and definitely the most humorously self-deprecating, that he’s produced to date. This is just one of the many comics that Van Sciver has released over the past year, many of which are published through Kilgore Books…a growing presences in the Two Guys’ arsenal of go-to small publishers. After that, Derek and Gene turn their attention to the first issue in Rick Remender and Sean Murphy’s new series from Image Comics, Tokyo Ghost. This is a futuristic story that takes as its premise the overriding and ever-present impact of on-demand digital culture in our lives. This inaugural issue does a fine job of setting up this narrative world, but Gene wonders if the nonstop action and complex visuals may be too much at times. Lastly, the guys take a brief look at an issue of an online zine they have just discovered, Jackie Batey’s FutureFantasteek! Issue #16 was released at the beginning of 2015, and while the latest installment can stand on its own, Derek and Gene suggest that the title can best be appreciated when read over the course of its run. For those with a diverse taste in comics, this episode is definitely for you!

For the Video version of this interview:

For the podcast version of this interview:
https://soundcloud.com/yupfrank/rbdhb-sean-gordon-murphy-interview-bcc-2014

On this podcast we talk comics. A lot of comics. Detective Comics #27, Wolverine #13, Avengers World #1, All-New X-Factor #1 and Revolutionary War: Alpha #1. See? Then we talk some news. Listen in!

What was the best book you read last week? Head over to our podcast Facebook page and let us know.

In part two of our New York Comic Con interview special, Calvin speaks with Laurence Maslon creator of Superheroes! – both book and PBS documentary, Heidi interviews Mariah Huehner of Emily and the Strangers and Womanthology, Kate talks to Dallas Middaugh of Kodansha USA, as well as Greg Pak of Code Monkey Save World and Batman/Superman, guest host Matt White talks with Colleen Doran of A Distant Soil, Brian Wood of X-Men, Cullen Bunn and Brian Hurt of The Sixth Gun, Sean Murphy of Punk Rock Jesus and author Tom King on PWCW’s More to Come.

Stay tuned for the next installment of our NYCC interview coverage!

This week on the punchiest punk rock LIVE radio show about comics and pop culture, we welcome multi talented comics creator Sean Murphy to the Monster Cave. You’ve seen Sean’s work on such books as American Vampire and Joe the Barbarian. His latest work is Punk Rock Jesus from Vertigo, which he writes and draws (issue #2 just came out last week so run to your local retailer and pick it up!) Sean will be entertaining our questions but if you’ve got a question for Sean, , feel free to post it on our Facebook wall or give us a call at 506-453-4949.

And, as our usual ‘Shit Comics Reviewers Say’; This week we picked up Archer and Armstrong #1 and Venom #22 from Strange Adventures.

Congratulations to all the winners!

A day late due to technical difficulties (*cough LIBSYN cough*), but I still have plenty to review for you! Pick Of The Week goes to Scott Snyder & Sean Murphy for American Vampire: Survival Of The Fittest #5 (Vertigo). Fast Five picks include Orchid #1 (Dark Horse), Frankenstein: Agent Of S.H.A.D.E. #2 (DC), PunisherMAX #18 (Marvel), Deathstroke #2 (DC), and Who Is Jake Ellis? #5 (Image). Spoilers!

The DC reboot continues on strong this week!

Only 2 video reviews remain until the switch to audio!

No review show next week because of Comic-Con!

Quite the impressive week for comics! Pick Of The Week goes to Jason Aaron & R.M. Guera for Scalped #49 (Vertigo). Fast Five picks include Deathstroke: The Curse of the Ravager #1 (DC), Journey Into Mystery #624 (Marvel), American Vampire: Survival of the Fittest #1 (Vertigo), PunisherMAX #14 (Marvel), and Citizen Cold #1 (DC).

This episode of Cammy’s Comic Corner has been brought to you by, THE SQUEEG!

In which the boys ask an important question to their listening audience: “Who buys this stuff?” 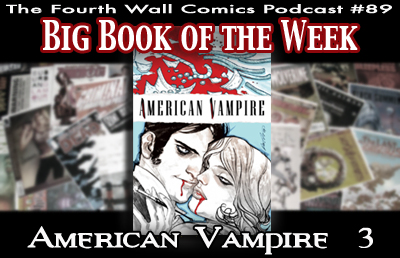