For this week’s episode, Andy and Derek put on their English professor hats, and with a vengeance, when taking on the latest comics version of Beowulf (Image Comics), adapted by Santiago García and David Rubín. While this is not, by far, the only comics adaptation of this classic Old English poem, the guys feel that it’s one of the best they’ve seen. Indeed, Rubín’s artwork is particularly suited to the violent action and Beowulf’s heroic exploits. And the ending of this text, which takes a significant self-reflective turn, goes on to underscore the guys’ appreciation of this adaptation.

Next, the Two Guys look at one of the latest releases from Retrofit Comics/Big Planet Comics, Karine Bernadou’s Canopy. Neither Derek nor Andy were familiar with Bernadou’s work before this book, but they find this a fascinating introduction to the French illustrator. Canopy is an almost completely wordless tale surrounding a young woman trying to make it on her own. But she does so in a surreal wilderness infused with male-centered threats.

For their final title of the week, the guys discuss an author who’s not gotten enough attention on the podcast…at least from Derek’s perspective. The first two issues of Richard Corben’s Shadows on the Grave (Dark Horse Comics) are now out, and the guys take on this anthology-like miniseries. These brief stories have a Night Gallery feel, but with an amped up creepy factor. This is all due to the wonderfully disturbing art of Corben, who opts for a black, white, and gray tone rendering, a change from his other recent Dark Horse work. 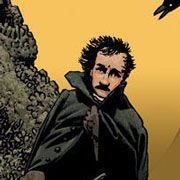 Richard Corben has repeatedly adapted the works of Edgar Allan Poe — in fact, he’s drawn some of the same stories several times! Most recently he’s done the work collected in Dark Horse’s Edgar Allan Poe’s Spirits of the Dead.

How do his different versions of such works as The Fall of the House of Usher compare to each other? How has Corben enhanced Poe’s stories? Is reading Poe adapted as a comic a substitute for straight-up reading Poe? In general, is it harder to be scary in comics compared to other media? Kumar and Dana discuss.

In this episode of The Comics Alternative, the third of what promises to be an unprecedented five consecutive shows for a single week, Derek and Andy W. discuss four new #1 and one-shot issues. First, they look at Christopher Sebela and Chris Visions’s Dead Letters (BOOM! Studios),

focusing on the story’s clever use of narrative gaps and art-driven action. Then they turn to Shutter (Image Comics), a new series from Joe Keatinge teams up with debut artist Leila del Duca. The guys love the initial setup, but nonetheless wanted more story in this inaugural issue. From there they delve into JC De La Torre and Ray Dillon’s Star Mage from IDW Publishing, and what promises to be an intriguing new sci-fi title. Finally, Derek and Andy wrap up with a long discussion of Richard Corben’s latest adaptation, Edgar Allan Poe’s The Premature Burial (Dark Horse Comics). They point out that the issue also includes an adaption of “The Cask of Amontillado” — in fact, “Cask” takes up more of the issue than does the titular feature — and that it works in similar ways to the other recent Corben adaptations of Poe for Dark Horse, leading up to the fall publication of the collection, Edgar Allan Poe’s Spirit of the Dead (Dark Horse Books). The Two Guys had a great time discussing these new comics, and you can join in on the fun as well by lending your ear to this week’s review show.

What do writing cool Heavy Metal songs and writing comics have in common? Nothing! Absolutely nothing! Put down that pen, and go back to your guitar where you belong, headbanger! Rob Zombie, Scott Ian, and Glenn Danzig all share a mutual passion for comics, and had brilliant artists at their disposal, so what went wrong? Blind love of 70s creature features? Sycophantic DC editors? An obsession with “croc-like creatures”?! Kumar and Dana attempt to wade through the muck…

In this episode, the Pick Of The Week goes to Mike Mignola & Richard Corben for Hellboy In Mexico (Dark Horse). Fast Five picks include iZombie #1 (Vertigo), Batman And Robin #12 (DC), DEMO 2 #4 (Vertigo), Brightest Day #1 (DC), and House Of Mystery #25 (Vertigo).

Don’t forget to check-out the new episodes of Geeky Talky at the site!

I cannot praise the series Chew enough! Such a spectacular comic.