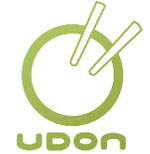 Udon Entertainment is a network of creators who produce original comics (much of it in Japanese style) as well as doing work in Hollywood, video games, and toys, and translated manga. This week Tim talks to Eric Ko and Matt Moylan at Udon headquarters in Toronto, about their history, their recent projects, and the future of digital comics.

Then, Udon member and Japan resident Steven Cummings talks about what he’s done for the group, how he feels about the inking on his pencils, and more.