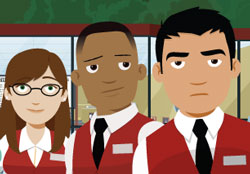 Tim Across America, part 7! Gordon McAlpin has put in more than a decade on the popular Web comic Multiplex, about kids who work at a movie theater — a concept he had originally thought was stupid! What changed his mind? How has he successfully funded two Kickstarter projects to print books of his comic? He talks with Tim about this in a Minneapolis restaurant, as well as using Patreon for funding, his tools for making the strip, and the good and bad points of letting your characters age.

Plus, a clip from Tim’s appearance on the KFAI Minneapolis radio program True Brit!