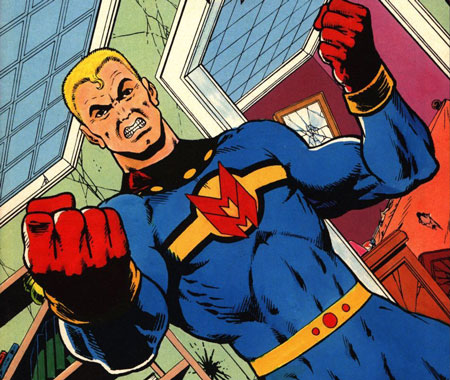 Comic News Insider: Episode 834 is now available for free download! Click on the link or get it through iTunes! Sponsored by Dynamic Forces.

Jimmy is back in NYC! Alas, due to being way behind and regular co-hosts busy, he has to do a quickie solo episode. But as usual, he rallies some of his awesome CNI correspondents to send in audio reviews. Thanks to Ashley, Heidi, Jon and Marta. You all did great jobs! News includes: DC Comics is publishing comics based in Neil Gaiman’s Sandman world, Marvel Comics is bringing a new The Sentry series, Star Wars may have time travel now and more! Leave your iTunes comments! 5 stars and nothing but love! Also, get a hold of us!

On this podcast we talk about Diggle’s new helmet, the Arrow: Season 4 trailer and Force Friday. Then it’s on to comics with reviews of Plutona #1, Deadpool vs Thanos #1 and Miracleman #1. Everything old is new and reprinted. Listen in!

What did you buy at Force Friday? Head over to our podcast Facebook page and let us know.

This is a bittersweet episode of The Comics Alternative, because Andy and Derek are both highlighting and saying goodbye to a title that has been one of their favorites these past thirteen years, Bill Willingham’s Fables (Vertigo). The series finale was just recently released — issue #150, which also doubles at volume 22 of the trade paperbacks — and the guys go into detail about the wrap-up of the main storyline, the final confrontation between Snow White and Rose Red that has been building over the past several narrative arcs. They also discuss the collection of “Last” stories that round out

this volume, short pieces illustrated by a variety of artists that give us a final (?) glimpse at some of Fables most important characters. In fact, this episode of the podcast is very spoiler-heavy, in that Derek and Andy couldn’t figure out how to do justice to the series without giving away a few important concluding plot elements. (So if you haven’t yet read this last installment of Fables, then perhaps you should do so before listening to this week’s show. Go ahead. The guys don’t  mind. They’ll still be here waiting for you.) But this episode is also a retrospective on the entire run of Fables, its many twists and turns, as well as the many spin-offs it engendered. As such, the Two Guys also touch upon Jack of Fables, the Cinderella miniseries, The Literals, Fairest, the current series Fables: The Wolf among Us, and the standalone volumes 1001 Nights of Snowfall and Fables: Werewolves of the Heartland. (Unfortunately, they don’t get around to discussing the prose novel, Peter and Max. There’s only just so much time in a podcast episode.) It’s obvious that both Andy and Derek appreciate Fables and see it as one of the most important titles of the past decade, but being the discerning scholars that they are, the guys don’t shy away from critiquing the long-running series and pointing out some of the narrative elements they found “thin” or potentially problematic. But to paraphrase a common adage, we criticize those we love the most, and the guys make it clear what kind of respect,  admiration, and outright affection they have for Fables. This episode is fond, heartfelt farewell to the team of Willingham (writer), Mark Buckingham (penciller), Steve Leialoha (inker), Todd Klein (letterer), James Jean and João Ruas (cover artists), Shelly Bond (editor), and an unparalleled community of collaborators.

Happy Memorial Day weekend! No Pick Of The Week this time around, but we do have a delightful Fast Five! Picks include Batman, Incorporated #1 (DC), CHEW #26 (Image), Fables #117 (Vertigo), Prophet #25 (Image), and Justice League Dark #9 (DC). Spoilers!

I began the show talking about the itch I feel from time to time. No, not THAT itch—the shopping itch. It’s the reason why guys may go a little overboard when it comes to our hobbies. I reminisce on a couple of old, but great, video games.

I wish I could say I’m finally done talking about Fables, but I’m not. I am done reading about it in Fables: The Dark Ages (Bill Willingham, Mark Buckingham). It finally introduces and deals with things that should have been done way earlier.

I stop myself from going on one rant by covering the new and surprisingly good, Thundercats show. Then I spend a few minutes going over my excellent, but out of print goody—Spawn Origins Deluxe Vol. 1.

Unfortunately, I must eventually move on to Fables: War & Pieces (Bill Willingham, Mark Buckingham). It’s the most anti-climatic ending to the war with the Adversary, and the easiest war ever.

Good morning everyone! I delve into talking about my limited experience with the overrated Mass Effect 1. I also compare the differences between Mass Effect and Dragon Age Origins.

Because of some tiny convention this week, I believe it’s called San Diego Comic Con, there’s plenty of news. I go over the panels I wasn’t able to attend and the upcoming books. I’m one step closer to the end of Fables by reviewing Fables: The Good Prince (Bill Willingham, Mark Buckingham).

It wouldn’t be an Independence Day weekend without a Michael Bay movie. So I give my spoil-free thoughts of Transformers: Dark (Side) of the Moon and about the trilogy in general. Even though I’m a HUGE Transformers fan, my thoughts are not as favorable as you might think.

I then cover Fables: Sons of Empire (Bill Willingham, Mark Buckingham). It’s a very thick trade that’s all over the place. I’m not even sure who the sons of empire are.

In this fairly disappointing episode, I discuss only two titles, because these two were the only titles I somewhat enjoyed this week. I discuss Ultimate Avengers vs New Ultimates #5 (Marvel) and Fables #106 (Vertigo).

Just when I thought there was nothing to talk about on this hot, summer day, I find something I’ve been meaning to watch for ages—Never Sleep Again! If you’re a fan of the A Nightmare on Elm Street movies, you should watch it. If you’re not a fan, but into movies and the going ons behind them, you should watch it.

There’s no news this week, but there is Fables. Bigby’s back and so is his wolfpack in Fables: Wolves (Bill Willingham, Mark Buckingham). Too bad, half the trade is fluff.

Before I talk about comics, I break down my Top 5 Cartoons of all time. Woo-hoo! There’s been some kind of news with DC this week, but I have a hard time remembering it. I think it’s big. Whatever it is, it makes me incoherent.

I move on to Fables: Arabian Days (And Nights) by Bill Willingham and Mark Buckingham. Because of the title expect a lot of singing from Aladdin.

It’s been a few years since I’ve regularly watched Smallville, but of course, I had to watch the series finale. I “spoil” that. The finale was so bad an episode that I decided to make my own Smallville finale with complete sound effects. How would you have done the last episode?

I cover the rather good Fables: Homelands (Bill Willingham, Mark Buckingham). We finally get some answers to the main plot about the Adversary and who he is.