It’s that time again! It’s the end of the year, their very last weekly review episode of 2018, and so the Two Guys are ready to share what they consider to be their favorite comics of the past twelve months. This is Sterg’s first time doing this, but he successfully steps up to the plate to reveal what he considers his 10 favorites of 2018. And Derek does the same.

Before that, though, they go over a few statistics from the past year. Over the course of 2018 — at least up until the time of the recording of this end-of-the-year show — The Comics Alternativereleased a total of 171 episodes of the podcast. Of that number, 55 were interviews, 10 were webcomics shows, 11 manga episodes, 10 from the Euro comics series, 6 were young reader shows, 16 on-location episodes, and 1 special. (And since Sterg and Derek recorded this “Favorites” episode, there have been at least three other shows for the current year, an on-location, a webcomic, and a Euro comics show. Maybe a manga episode will go up before the new year, as well?)

But of much more importance are the various titles that both Sterg and Derek picked as this year’s favorites. Each chooses, in no particular order, what he considers to be his 10 favorites of 2018:

This week Sterg and Derek discuss three fascinating and genre-spanning titles. They begin with Lisa Hanawalt’s Coyote Doggirl (Drawn and Quarterly). As the guys point out, this is a humor-infused story that engages with the western genre. Both Derek and Sterg mention that while they appreciate Hanawalt’s off-beat sense of humor, they haven’t been big fans of her past books, in that they weren’t so much narrative comics as they were illustrated works of humor. But Coyote Doggirl is more of a “traditional” comic, with sequential panels and a discernible storyline. The premise is more or less simple, but that’s part of the charm of this text. And the humor!

Next, the Two Guys with PhDs turn to Emi Gennis’s Baseline Blvd., released earlier this year from Kilgore Books and Comics. This actually began as a webcomic back in 2015, but it was published in hardcopy as part of Kilgore’s Kickstarter campaign for their 2018 releases. Where many of Gennis’s comics have been profiles or biographies, this latest book is more autobiographical in nature. As the guys point out, there is a silent elegance about this work, and Gennis packs a lot of story — and emotion — into her brief narrative.

The guys then wrap up the episode by looking at Warren Ellis and Jason Howard’s Cemetery Beach #1 (Image Comics). Sterg observes that this seems to be a typical Ellis narrative — and “typical” in a good, demonstrative way — and both of the guys comment on Howard’s art. In fact, much of this first issue is carried by the illustrations. In all, it’s a successful first issue. This seven-issue sci-fi series has a lot of promise, and both Derek and Sterg look forward to seeing where the creators take their premise. 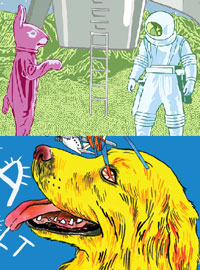 In part two of our four week series, Comics We’re Thankful For, special guests: Derek Yang, Karen Hernandez, and Josh Cui discuss Y THE LAST MAN by Brian K. Vaughan and BLANKETS by Craig Thompson. The specific issues of Y THE LAST MAN that were discussed were Y the Last Man issues #1 – #5, #17 – #19. Listen to the podcast above or download on iTunes.