This week Andy and Derek look at three new titles, each one visiting the fantastic in one form or another. Before they jump into the reviews, however, they discuss some of the big comics news from the past week: the announcement of the 2017 Eisner Award nominations and Free Comic Book Day. The guys don’t go into too much detail about the Eisner nominees because they plan on devoting an upcoming episode to that topic. However, they do briefly mention the curious situation surrounding the nomination of the Love Is Love collection in the Best Anthology category. They have much more to say about last Saturday’s Free Comic Book Day. Both guys share some of their experiences at their local shops and the free comics they got there. Listen to the podcast’s FCBD episode for more details.

But then the Two Guys get into the heart of this week’s show. They begin with Chris W. Kim’s Herman by Trade, coming out this week from SelfMadeHero. Although on the surface this appears to be a more realistic narrative, its fantastic elements become apparent in the transformation of the title character who has the ability to change his appearance and mimic others’ abilities at will. As both Derek and Andy point out, this is an unusual story that sticks with you long after reading.

Next, they turn to a new graphic biography that is all about fantasy, Rise of the Dungeon Master: Gary Gygax and the Creation of D&D (Nation Books). The art is by Koren Shadmi, but the book is written by David Kushner, based on a profile he wrote for Wired magazine in 2008. What’s most notable about this brief biography is the narrative point of view, almost entirely presented in the second person. This is fully in keeping with the spirit of role-playing games, where in this case the the narrating presence is, in essence, your “dungeon master” guiding your awareness as you enter the creators’ biographical realm.

Finally, Andy and Derek conclude with the latest collaboration from Jonathan Luna and Sarah Vaughn. Eternal Empire #1 (Image Comics) is a fantasy set in a distant world that, as Andy points out, is reminiscent of Game of Thrones. In fact, the guys spend a good bit of time speculating on the originality of this series, wondering if the unique elements will become more apparent in the issues to come. And while Andy isn’t sure if he’ll stick around to find out, Derek is going to give Eternal Empire a chance, especially given his appreciation of the Luna brothers’ previous comics, and especially Luna and Vaughn’s previous series Alex + Ada. 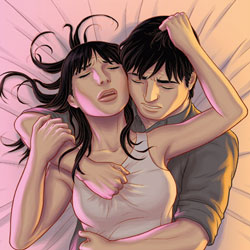 Alex and Ada is Jonathan Luna and Sara Vaughn’s critically acclaimed 15-issue series about human interaction with A.I. It raises some interesting issues, but does it handle them well? Have the same ideas been explored better elsewhere? Tim and Kumar open up the machine and take a look.

Comic News Insider: Episode 427 is now available for free download! Click on the link or get it through iTunes! Sponsored by Dynamic Forces.

With Siege over with, now onwards to the MILLIONS of upcoming Avengers titles!