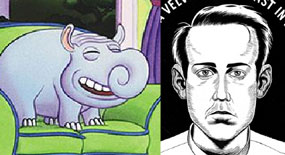 The recent Sydney Graphic Festival, held August 20 & 21, featured a variety of artists from comics and other media in panels and the like. Kumar attended, and discusses what he saw there (and the one huge, disappointing cancellation) before we get to the main event: his interview with creator Jim Woodring. Woodring is best known for the Frank series of dialog-free, surrealistic comics. Kumar investigates what’s inspired Woodring’s work.