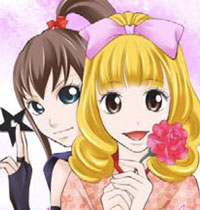 While the American comics publishers, and publishers in general, are making more and more content available digitally, the situation is quite different here in Japan. The traditional manga publishers — Shueisha, Kodansha, and Shogakukan — have been very slow to embrace the digital market.

This week we meet Masanori Kinomiya, Representative Director and President of DML. DML offers services to convert print comics to digital formats, and has created the G2 Comix line of original manga titles. G2 is doing well in Japan (where 80% of ebooks are comics!), and around the world in a variety of languages. So why are the Big Three (and Japanese publishers in general) still putting out little or no electronic content? Kinomiya-san explains to Tim.

Read DML’s company profile PDF, including statistics on ebook readership in Japan and a look at some G2 Comix titles.

See photos below the jump.

END_OF_DOCUMENT_TOKEN_TO_BE_REPLACED

The Backroom team discusses the latest comic news, takes a look at the issue of variant covers, and browse through Jason’s childhood long box.

In this double sized issue, the guys look back on 2010 and everything that went on in geekdom.

We start off by reviewing Tron: Legacy, new games for the iPad, net neutrality, as well as some of the best in gaming, movies, and technology.

Chris and Scott are two very different freaks, but they have one thing in common: THEIR FAVORITE COMIC OF ALL TIME! Come, let’s celebrate that comic together!

Comixology.com, which first appeared as a comics information site with pull lists, surprised a lot of people when it branched into selling major-publisher comics for the iPhone. Says CEO David Steinberger: “A lot of people see this as transforming; we see it as following our business plan.” This week Steinberger talks to Tim about formatting print comics for electronic viewing, why electronic comics are not a threat to print, and the possibility of e-rotic e-comics.

The Backroom Podcast crew tackle the issue of digital censorship in response to recent moves by Apple, and then they share what comics they’ve been reading lately.

In this special episode, I’m joined by Chip Mosher, Marketing Director of BOOM! Studios. We talk about the amazing new BOOM! Studios App for the iPad / iPhone, and why you should go out and download it ASAP!

Comics are increasingly read as bits and bytes, on PCs and handheld devices.

Blank creators Brothers of the Silence are publishing the comic in Flash on their site, and as image files on Facebook and several other sites. “Brothers” Ian LeWinter and Don Richmond talk about creating the comic and promoting it via social media sites.

Dale Wilson of DWAP Productions, making his second appearance on this podcast, discusses the ways his company is getting its traditional paper product out in handheld device formats.

Remember “Yon Kuma”? Tim and Mulele reviewed it a year ago. It’s now called “Bear Beater Bunyan,” and it’s an iPhone app. Artist Jorge Munoz talks about the path he and writer Josh Hechinger followed in making the comic available for handhelds.

“Bear Beater Bunyan” is just one of many comics available from Robotcomics.net. Robot Comics Deputy Director Dave Baxter fills us in on the state of the growing comics market for handhelds and how Robot does what it does.

Finally, Tim and Mulele review some of Robot’s output.