Hey there true believers this week we sit down with the host of Marvel’s official podcast The Mighty Marvel Podcast. He is also the Sr. Art Director over at Marvel, Jeff Suter. We talked to Jeff about Marvel, hosting podcasts, his band and many other topics. Jeff is a great guy and this interview was a lot of fun for us so we hope you enjoy. ‘Nuff Said.

Go check out the following sites:

It’s the 68th episode of the Wayne’s Comics podcast!

This week I have a great interview with Joe Harris, accomplished comics creator of such books as Ghost Projekt, Spontaneous and The Fury of Firestorm: The Nuclear Men. He discusses his short film Witchwise and upcoming projects including “Arkham’s Ghost” for Legends of the Dark Knight and Great Pacific at Image. We talk about many things in the comics universes, including hardcovers and digital comics. For more information about Joe’s work, you can check out his website at joeharris.net!

Then I review the latest comics, followed by Gianluca Glazer discussing the latest News & Previews! Everything wraps up with my review of the recent Baltimore Comic-Con, so don’t miss it!

This week I go over some of the best trade, graphic novels and or hardcovers out there that I think you need to pick up and give a try. I extensively go through the past few months release and pick and choose the true cream of the crop with my selections. This was a listener suggested topic by @AgentFuture of twitter thank you again for the feedback. Enjoy! 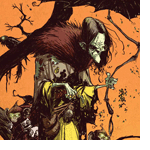 This week on Gutter Trash, we celebrate our first anniversary by reviewing the Marvel Comics adaptation of The Wonderful Wizard of Oz by L. Frank Baum, Eric Shanower and Skottie Young.

This October many Comic Book Podcasts are joining up and featuring the theme of Politics In Comics. The CCL is no exception and is happy to participate. But as a solo podcaster, it’s hard to debate myself, so I had to dig into the Library and find a suitable book that covers both government and superheroes. I found it in the classic/must read Dark Knight Returns by Frank Miller. But instead of focusing in on Batman, I reached for another angle and that is Superman and his role with the current United States administration. It’s a perspective of the book that I think you’ll find it very insightful and force you to look at it differently then you have in the past.

Also on the show this week, there’s news of an Industrial Strength Brat Pack HC by Rick Veitch, an upcoming Marvel Masterworks Human Torch Volume 2, an update on the misprint of Showcase Presents Haunted Tank Volume 2 and word of a Wolverine Omnibus slated for next spring just in time for the Hugh Jackman movie.

Lastly I want to congratulate the winners of my latest giveaway contest: Wanted TPB goes to Michael McHardy, Calgary, Alberta and The Goon Vol. 0 Rough Stuff goes to Richard Holland, Chicago, IL; all this and the New Releases of the Week.

Last minute change for me this week but you won’t even notice the difference. I was going to review Iron Man vs. Doctor Doom: Doomquest, in honor of the Iron Man DVD release this week (and the Premiere Hardcover of Part Three from last week), but instead I opted for the more important feature of The 2008 Harvey Awards (Collected Edition) Winners. Keep in mind, that I only go over a few select winners so as not to drag on too long nor do I want to come across as ignorant. Seriously, I don’t know that much about Lettering. I’ll cover all three parts of Shellhead and Doom in another podcast, perhaps even Show #200.

Some other things that I go over include the two upcoming Omnibuses from Marvel: Inferno and Captain Britain and what they may contain; Dark Tower Premiere Hardcover slip-ups from Marvel and the Shipping and Product Changes. Lastly I go over the New Releases of the Week.

As I mentioned in Monday’s blog, I get a lot of collected editions and because of that many (err most) of them go on the back burner. That is exactly what I did with The Hellboy Library Volume 1 (Dark Horse). I’m ashamed that I did so because it’s turned out to be one of my favorites of 2008. Not only do I feature that book for this weeks’ podcast but I also skim over Volume 2 (due out next week), The Art of Hellboy HC and The Hellboy Companion TPB.

Surprisingly, there’s not a whole lot of news this week except for one major and yet very funny misprint to the Daredevil by Brian Michael Bendis Omnibus (Marvel), which I blogged about yesterday. I also go over the Shipping and Products Updates, the New Releases of the Week and my Facebook page. Lastly there are two giveaways to tell you about: The Goon: Wounded Animals TPB and Wanted TPB. Details on how to enter and win are talked about on the podcast.

I’ve got a jammed packed show for you this week on the show. As I promised, the feature is Jack Kirby’s Silver Star (Image Comics), but I also throw in a bonus review of his O.M.A.C.: One Man Army Corps (DC Comics). I did so because the two main characters, Morgan Miller (SS) and Buddy Black (OMAC) are very similar and both were modeled after one of Jack Kirby’s and Joe Simon’s most famous creation Captain America; OMAC even more so. As I state in the podcast, both books are not for a first time Kirby reader. The OMAC series was canceled after issue #6 and is left on a huge cliffhanger while Silver Star is just plain convoluted and difficult to comprehend. Both books however are excellent resources f

or the Kirby enthusiast and they include many pencil sketches supplied by John Morrow of TwoMorrows Publishing.

If you read my column from Monday on the situation with All Star Batman and Robin the Boy Wonder #10, then you’ll be primed for a follow-up segment where I call myself out as a hypocrite (of sorts). I also go over all the Collected Edition related news coming out of the Diamond Retailer Summit and I list the sales estimates for the top 10 graphic novels and collected editions for August 2008. On a side note, I’ll be recording with John Mayo in the next week or so and will post the link to the podcast (as I always do) when it is published. All this including the New Releases of the Week.