Comic News Insider: Episode 865 is now available for free download! Click on the link or get it through iTunes! Sponsored by Dynamic Forces.

Jimmy leaves early Wednesday for San Diego Comic Con and is still madly organizing his schedule. Many thanks to pals Emily, Marta, Emmy, Jon and Heidi that sent in audio reviews. And big ups to old childhood friend Jessica for being this week’s newsreader. News includes: HBO picks up Joss Whedon’s sci-fi series The Nevers, Dark Horse Comics announced the release of three new titles in Mike Mignola’s Hellboy universe, DC Comics announced it’s next group of crossovers w/ Hanna-Barbera characters and more! Leave your iTunes comments! 5 stars and nothing but love! Also, get a hold of us!

The crew returns from Zone 4 to discuss the latest slew of Hanna Barbera/DC crossovers before pitching their own!

Plus, a little news, a look at September solicits, and plenty of segues and tangents!

Check out the exclusive pre-show on Patreon! 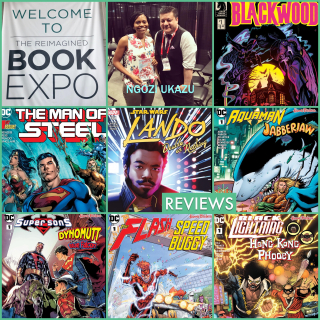 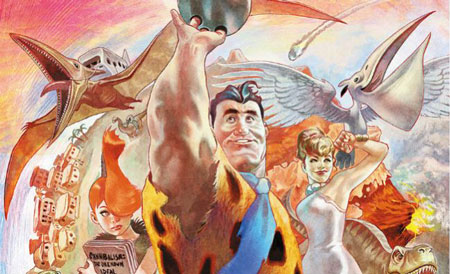 One breakout hit comic of the past year is DC’s The Flintstones, by Mark Russell and Steve Pugh. This week, Tim and John Roberson talk with Pugh about the challenges of adapting the 1960s characters to a slightly more serious art style and discuss writer Russell’s decidedly different take on this classic Hanna-Barbera property.

Patrons can hear a bonus review of Flintstones #12 on Patreon!

This week Andy and Derek discuss five new titles. They start off with Michael DeForge’s latest book, Sticks Angelica, Folk Hero (Drawn and Quarterly). While this is an unusual story, it’s nonetheless one of DeForge’s most conventional stories, at least when compared to many of his previous works. It’s an episodic narrative about its titular character, a multi-talented 49-year-old woman who moves to a Canadian national park to escape a scandal surrounding her rich father’s finances. There she befriends a bunny named Oatmeal, a moose lawyer who goes by the name “Lisa Hanawalt,” a love-struck eel, a “marked” young woman called Girl McNally, dumb geese, proxy ants, a bear chronicler, and the park’s wannabe reporter “Michael DeForge.” Did we mention that this is one of DeForge’s more conventional stories? This title began as a webcomic on Tumblr, and while people can still find the complete comic up and available, the guys strongly recommend that listeners get the new book to fully take in the physical, tactile experience.

Next, the Two Guys with PhDs turn to the four new Hanna-Barbera one-shots from DC Comics: the Adam Strange/Future Quest Special (by Mark Andreyko, Jeff Parker, and Steve Lieber), the Booster Gold/The Flintstones Special (Mark Russell, Rick Leonardi, and Scott Hanna), the Green Lantern/Space Ghost Special (James Tynion IV, Christopher Sebela, and Ariel Olivetti), and the Suicide Squad/The Banana Splits Special (Tony Bedard, Ben Caldwell, and Mark Morales). They both enjoy all four of the titles, although Derek has some reservations about the Suicide Squad/Banana Splits team-up, and Andy feels that the Green Lantern/Space Ghost one is a missed opportunity. But they spend about as much time discussing the short backups in these four specials, with Howard Chaykin’s Ruff ‘n’ Reddy being a standout. Is that any surprise

Do you have a suggestion for an issue? Let us know on twitter @finalissuepod or email finalissuepodcast@gmail.com

In this episode of Zone 4, Brant’s written out, Dollar Bin Christian Bale is in, and be vewy vewy quiet… it’s Bat Hunting Season!

The crew returns to discuss a very light week of news that spirals out of control. The Facebook Shout-Outs return in full effect. Then, just as the main topic (Comic Relaunches: Good or Bad for the Industry?) gets started, Brant gets booted out!

Listen in for all the insanity! 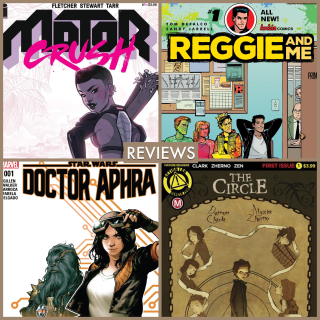 Comic News Insider: Episode 740 is now available for free download! Click on the link or get it through iTunes! Sponsored by Dynamic Forces.

Jimmy is joined in studio again by co-Hoche-st with the most, Jon Hoche! Jimmy’s birthday did not go as planned but he appreciated your wishes! He also attended the awesome Warner Bros. Holiday Media Mixer and got to hang with some of his favorite publicists. News included: Dragon Ball Super will air in January, A Duck Tales reboot is coming next year, Archie Comics will release 4 special one-shots, Gypsy will come to The Flash TV show, Pokemon Go releases new monsters, Fantagraphics is getting into the superhero game, R.L. Stine will write Man-Thing, and DC Comics is teaming up some of their heroes with ones from Hanna-Barbera. Leave your iTunes comments! 5 stars and nothing but love! Also, get a hold of us!

Comic News Insider: Episode 670 is now available for free download! Click on the link or get it through iTunes! Sponsored by Dynamic Forces.

Jimmy is joined in studio for the 2nd week in a row by regular guest co-host Emily Edwards! They chat about the DC Comics Rebirth rumors out there and whether they would drop their friends if they got famous. (Emily claims no and you can probably guess what Jimmy claims). News includes: DC announces new slate of Hanna Barbera comics, the CW has picked up the pilot episode for the live action Riverdale series, Barbie gets a makeover, Pottermore announces more wizardry schools, and Fish Mooney returns to Gotham! Leave your iTunes comments! 5 stars and nothing but love! Also, get a hold of us!

This weeks show Shawn is joined by guest host Adam Umak as they share an interview with Thomas Cook, an animator and artist that has worked on some of your favorite childhood cartoons ranging from Superfriends to Ducktales. He’s worked for animation homes that range from Hanna Barbera, Ruby Spears, Disney, Filmation and so many more. Get ready far a great convo as we discuss his influences, how he got his start in the animation industry, Jack Kirby, the rise & fall of the U.S. animation studio, comics, and as much as we could fit into this episode.

Thomas is still in the art game, working on Comic Book Cover Recreations at his site: http://www.comicrecreations.com

It’s Saturday morning and weekday syndicated goodness all over again. Enjoy the show.