This month Sean and Derek offer a genre buffet of webcomics goodness. They begin with Jay D’Ici and Matt G. Gagnon’s Conceptual Heist, a heist narrative with a unique science fiction twist. As the guys reveal, the story is solid, and the black-and-white art, accentuated with a monochromatic blue, suggests a noir tone. After that they discuss a highly popular webcomic that has been around since 2008, Gisele Lagace and David Lumsdon’s Ménage à 3. Derek and Sean describe this as a cross among Strangers in Paradise, Archie, and the TV series Three’s Company…but more suggestive and explicit than the latter. While the guys can see the appeal of this thrice-weekly strip, they nonetheless feel that reading its various narrative arcs over a more concentrated time period — as opposed to experiencing this story as its pages are released — doesn’t necessarily work in the webcomic’s favor. Finally, the guys wrap up with fun completed webcomic from Chris A. Bolton and Kyle Bolton, Monstrous. This is a mini-story within their Smash world, one that the Bolton brothers completed between their earlier work, Smash: Trial by Fire, and the next Smash book that will be published through Candlewick Press. 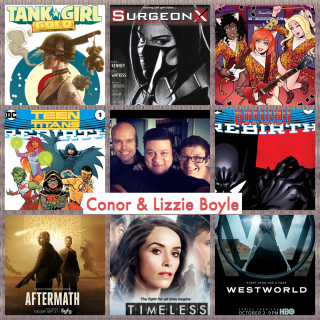 Comic News Insider: Episode 723 is now available for free download! Click on the link or get it through iTunes! Sponsored by Dynamic Forces.

Conor and Lizzie Boyle come all the way over from the UK to do the podcast! Okay, they just happen to be in town but they return to CNI to join Jimmy for some NYCC talk, their comic imprint Disconnected Press and Conor’s other comic work. Plus, Jimmy has a few episodes of Luke Cage left to watch and briefly chats about it sans spoilers. News includes: Disney is doing a live action (kind of) The Lion King,  Comixology Originals brings original content, The Dominators will dominate as bad guys for the CW superhero shows, Adventure Time and Archer are ending, Iron Fist will debut on Netflix next March, DC Comics is bringing back the Wildstorm imprint, and Dark Horse Comics is collaborating to release a special Hellboy Reserve Pinot Noir. Leave your iTunes comments! 5 stars and nothing but love! Also, get a hold of us!

Comic News Insider: Episode 536 is now available for free download! Click on the link or get it through iTunes! Sponsored by Dynamic Forces.

Reviews: No reviews this week as it’s a TCAF recap!

Producer Joe joins Jimmy to discuss their recent jaunt to The Toronto Comic Arts Festival (TCAF) in Toronto. They give their recap and thoughts on the terrific show. Such a great time! Thanks to everyone involved for such a well run and fun festival. Great interviews included in this podcast are with Darwyn Cooke (Parker), Nicholas Gurewitch (Perry Bible Fellowship), Kazu Kibuishi (Amulet), Mike Maihack (Cleopatra in Space) and Renee Nault (Witchling). News includes: 3 DC titles (iZombie, Flash, Constantine) picked up for TV runs, Marvel’s Agent Carter is coming to TV as well with Agents of S.H.I.E.L.D. getting a second season pick up, More Marvel films from Fox including X-Force, Gambit and Deadpool, Usagi Yojimbo returns with a sci-fi twist, the Finger family is not okay with DC Comics, and the smallest comic might be in your hair. Leave your iTunes comments! 5 stars and nothing but love!

Tune in later this week for some special podcasts! First up on Friday is a lunch interview with Becky Cloonan (By Chance or Providence, Batman) and Renee Nault (Witchling). Started out as just a recap and turned into a wonderful conversation about self publishing, advice for tabling at a show, and some of their upcoming projects. Then on Sunday, we’ll release the spotlight panel that Jimmy moderated with German cartoonist Reinhard Kleist (The Boxer, Cash: I See A Darkness). He’s a talented, smart and funny man with a great career. Hear them discuss it all!

Then come back next week for even more TCAF interviews with Jesse Lonergan (All Star), Eric Kim (Nitro Battlers), Box Brown (Andre the Giant), Lianne Sentar/Rebecca Scoble (Sparkler Monthly) and the Sports vs Comics panel that Jimmy moderated.

This week on your favourite LIVE comics radio program, we welcome comic book creator Gisèle Lagacé to the Monster Cave. You know Gisèle’s work from such books and web comics as Eerie Cuties, Penny and Aggie and Ménage à 3. You’ve also most likely seen her work on a little book called Archie (maybe you’ve heard of it?). Gisèle joins us to chat about all this and more so If you have a question for Gisèle Lagacé, feel free to post it on our Facebook wall or give us a call at 506-453-4949.