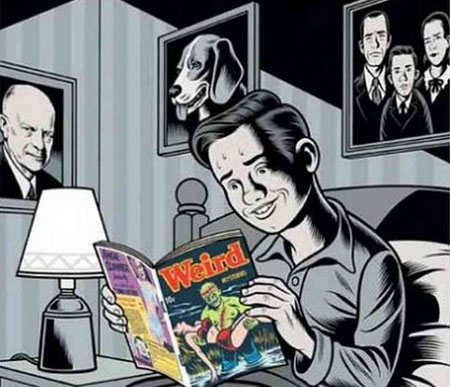 The Comics Code, while not much more than a memory today, had a huge effect on the direction of American comics for half a decade. David Hajdu’s book The Ten-Cent Plague looks at the events that led up to the code, following the development of comics — and the protests against them — through the first half of the twentieth century. Why were comics scapegoated for social ills? Tim and Paul discuss the book.

“Whiskey dick does have a sound effect.”

This week the Two Guys with PhDs Talking about Comics are excited to have as their guest creator extraordinaire, Matt Fraction. They talk with Matt specifically about his new series through Image Comics, Satellite Sam (with Howard Chaykin on art) and Sex Criminals (with Chip Zdarsky), but they also take the opportunity to discuss other works of his, such as the current Hawkeye series, his Casanova comics, and graphic novels such as The Five Fists of Science. Perhaps one of the most enlightening moments of the interview concerns issue #2 of Satellite Sam, where Matt points out that you can indeed letter the sound of “whiskey dick.” But comics aren’t all that the guys discuss. Andy, Derek, and Matt also spend a lot of time talking about

It’s a veritable smorgasbord of pop cultural fun! However, Andy comes away from the experience a changed man, wondering if his love of everything Dean Martin has all been for naught. “Nothing gold can stay, Ponyboy.”

EC Comics are primarily remembered as gruesome horror stories, but the company published in other genres as well. One EC staple was war comics, which enjoyed great popularity during the Korean War. One such title was Frontline Combat, the comic that dared to admit that “Marines retreat!” The now-huge names behind the series — Harvey Kurtzman, John Severin, Jack Davis, Wally Wood, and more — primarily intended it as an anti-war book, but is it? Is it possible to simultaneously portray war as horrible, and painstakingly present the tanks and guns in all their glory? Tim and Kumar discuss.