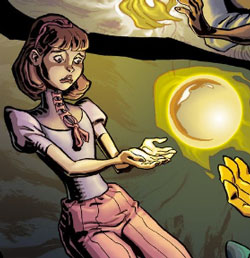 Helen Maier and Fil Barlow are longtime partners and collaborators who have turned out a number of comics, available mainly in their native Australia, and worked on animation and character design on a number of cartoons that millennials watched as kids, such as Extreme Ghostbusters and Tutenstein.

Since returning to Australia in 2010, they’ve gone all in on comics, and the first two chapters of their story “Yorris” appeared in issues 4 and 5 of Image’s rather mysterious 8House anthology series.

This week, a talk with Helen about Czech comics and the view from the animation trenches becomes a talk with both Helen and Fil about the meaning of (and Easter eggs in) “Yorris”, their attempts to turn some conventions of comics storytelling on their heads, and the pluses and minuses of the crowdfunding model.