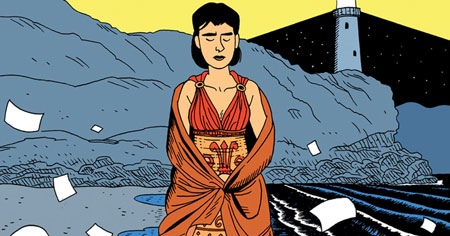 Twenty years after the first collection of Hicksville was released, creator Dylan Horrocks talks to Emmet about how the comic looks to him now. Some of the work’s commentary on the comics industry turned out to presage subsequent developments, and in some cases he ended up not going far enough! Also, his source for a Jack Kirby quote that many experts were unaware of; the public’s misinterpretation of the term “graphic novel”; the explosion of female and minority comics creators, especially outside of the Big Two; and more.

This week the Two Guys with PhDs focus a critical spotlight on the spring releases coming out from Alternative Comics and the other small presses that are part of its distribution co-operative, Floating World Comics, Hic + Hoc Productions, Study Group Comics, and Press Gang. This is a jam-packed episode and longer than usual, a discussion that covers eighteen different titles among the five indie presses. Before they jump directly into the comics, though, Derek has a brief conversation with Marc Arsenault, the publisher of Alternative Comics and one of the ringleaders of the co-operative. He asks Marc about the origins of the press, its relaunch in 2012, its distribution agreement with the other indie publishers, and what readers could anticipate coming out of Alternative Comics in the months to come. After that introductory interview, Andy W. and Derek begin discussing the individual titles some out this spring, and organizing their conversation by publisher. These books include:

As Andy and Derek mention in the show, this has been a spotlight episode they’ve been wanting to do for some time. The guys are truly excited to talk about the new releases coming out from Alternative Comics (and its co-op partners)…and not just this publisher’s name is an inversion of the podcast title.

Our Man in Hicksville

For this episode of The Comics Alternative Interviews, Derek and Andy W. are pleased to have as their guest the man behind Hicksville, Dylan Horrocks. His new book, Sam Zabel and the Magic Pen, has recently been released by Fantagraphics, and on the show the guys talk with Dylan about his experiences writing the book and the philosophy underlying its creation. They begin by discussing its initial black-and-white serialization in Atlas (which lasted for only three issues between 2001 and 2006), and then was slowly released in color as an online comic beginning in early 2009. Indeed, as of the time of this interview, Dylan is still publishing the final pages of Sam Zabel on his website, so that the entire story will eventually be available digitally. However, readers will want to get the new hardbound copy in order to experience a full story immersion with its larger size format and its richness of color. The guys also ask Dylan about the narrative links between the new book and his other stories, most notably Hicksville, as well as any possible autobiographic significance in the character Sam. This leads to an in-depth discussion on the function of comics, the dynamics between fiction and autobiographic representation, and the moral implications of fantasy and self-censorship. In fact, Sam Zabel and the Magic Pen

is predicated on these dynamics, with its characters posing multiple positions or viewpoints that are never truly resolved. Instead of being a polemic or a didactic on the ethical responsibilities of the artist — as some readers have interpreted it — Sam Zabel and the Magic Pen is more an exercise in romantic irony, proposing conflicting and at times contradictory arguments that refuse any easy resolution, and instead, resides in an uneasy state of productive indeterminacy. In other words, the book’s resonance rests more in the questions it raises than in any possible answers. Andy and Derek also talk with Dylan about the publishing history of Pickle, his work for DC — specifically, his writing on Batgirl — the Vertigo series Hunter: The Age of Magic, and, of course, his efforts championing New Zealand comics and underscoring its rich history. Much of the conversation revolved around the New Zealand comics scene, past and present, with Dylan demonstrating himself to be one of its most ardent enthusiasts. (Indeed, you can find his directory of New Zealand cartoonists and comics creators on his website.) Even though this was a substantive interview, Derek and Andy didn’t get around to asking many of the questions that they had wanted to pose — e.g., Will you ever return to the unfinished “Atlas” storyline?, Will “Café Underground” ever be collected?, and When can we expect to see more Moxie and Toxie? — but what they came away with was a truly engaging conversation with one of the most exciting, and one of the most underappreciate, creators in comics today.