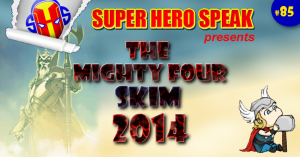 Are you a fan of the Jim Butcher’s “The Dresden Files”? So are we! Dave, Ben and John are so excited for the release of the 15th book in the series “Skin Game” they decide to dedicate this week’s episode to all things Dresden! From Harry to Bob to Karen to Mouse the guys geek out over the book series they love. So sit back and enjoy!

You can now support the show by shopping at our Amazon store! Get all the great products you normally get from Amazon and support our podcast at the same time. Win, win: http://astore.amazon.com/supe03b-20

No interview in this week’s show. So instead Wayne and I decided to give our thoughts on Jim Butchers Dresden Files: Ghost Story, which came out in late summer of last year and is likely to be in Paperback pretty soon if it isn’t already.

For the TV Segment we discuss our thoughts on the new Kiefer Sutherland series Touch, which has recently just hit in the UK.

For this week in Comics I discuss my excitement about issue 7 of Detective comics while Wayne waxes Lyrical about Atomic Robo and Gianluca eunthuses about his reading experience of Peanuts from Boom Studios.

As ever its a jam packed show this week and we hope to continue to bring more great content in the coming weeks.

If you would like to check out some of our older episodes you can do so by clicking here for our I-tunes store, which lists a fair few of our older shows, which are available for free.

Keep any out for next weeks show in which we’ll be featuring an interview with Leverage Executive producer John Rogers who throws us some subtle teases for season five of the hit TNT series, which is currently airing its third season on FX Channel in the UK.