This week the guys talk about some of the latest news from Marvel and DC and bring you 2 more interviews from The Great Philadelphia Comic Con 2018! The interviews are with comic book/horror writer Dirk Manning and artist Kari Lynn Smith. Together they created the comic book Hope, a dark an interesting twist on the superhero genre.  So sit back and enjoy! 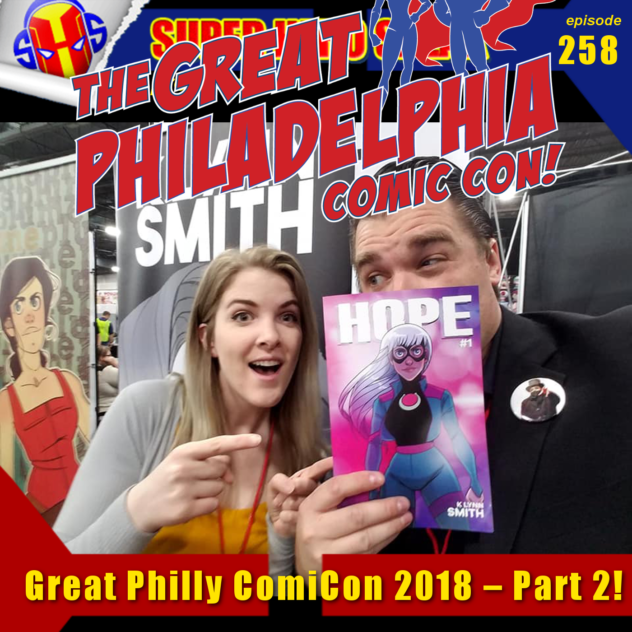 Have you read Tales of Mr. Rhee? No? Well, you should. As part of our Comics You Probably Never Heard Of podcast series, the ComicsVerse team sat down to talk about this popular indie series, but widely unknown to most outside of the independent comic scene.

Written by indie comic superstar and Cthulhu’s Homeboy Dirk Manning, the author of Write or Wrong, Nightmare World and of course, Tales of Mr. Rhee (hint hint, read the title out loud).

HEAR: Love a good creator owned comic book as much as we do? I’m sure you do! Warren Ellis and Declan Shalvey created INJECTION, listen to our interview with co-creator and artist, Declan Shalvey!

Tales of Mr. Rhee is a horror or pulp noir comic series, originally published as a spin-off of Manning’s Nightmare World series and follows Mr. Rhee, as he traverses a post-apocalyptic world after the rapture.  Currently, there are three volumes to the series, with the third only recently released. Volume one follows Mr. Rhee in multiple standalone stories while volume two is a thread of one story, over several comics and is a prequel to volume one. Unfortunately, we had a bit of confusion regarding this during the podcast, so not everyone was aware of the continuity of the series and this did hinder some in their understanding of the story structure. Getting past that, everyone seemed to enjoy the series and many of the ComicsVerse team, now look forward to future volumes as they release.

We had several series we covered on our Comics You Probably Never Heard Of podcast series, all of which went extremely well and as usually, the ComicsVerse team was very opinioned about all of the books. We hope that you check out the rest of the comics that we covered on the other podcasts, as well as checking out the entire catalog of ComicsVerse podcasts and articles on the site. Everyone really enjoyed Mr. Rhee and thank you, Dirk, for the interview at New York Comic Con 2015, which you can also find on ComicsVerse.

This week is all Topic Time as Dirk Manning stops by to talk about his latest book, The Tales of Mr. Rhee: Karmageddon, which releases in a couple of weeks! There are many tangents and sidetracks, a calling out of Victor Dandridge, and more fun in this packed episode! So hide your faces and get ready!

Dirk Manning drops by to give everyone the low down on what he’s up to and what you need to be looking out for from him in the future.

Be sure to use the coupons below with your local comic shop and pre-order LOVE STORIES (TO DIE FOR) #1 and THE LEGEND OF OZ: THE WICKED WEST #12:

This week on the only LIVE comics radio program that says if scary is wrong, we don’t want to be write, we welcome back comic writer, Dirk Manning to the Monster Cave. You’ll know his work from Nightmare World and his brand new writer’s guide to creating comics: “WRITE OR WRONG“. As always, if you have a question for Dirk Manning, feel free to post it on our Facebook wall .

We will also be checking in with our Senior Iron Man Correspondent, Brent O’Hara. He’ll be giving us his take on Iron Man Tres starring Robert Downey Dos. What did he think of Shane Black’s Mandarin vision? Tune in to find out!

If you tune in via our home station, CHSR FM, you will be able to listen in on the Adventures of Superman old time radio serials at the front and back of our time slot. Happy 75th birthday, Kal-El!

This episode DeWayne and Joe sit down and talk with writer Dirk Manning about his work on TALES OF MR. RHEE being published at Image Comics’s Shadowline and anything else that comes up. Writer Dirk Manning returns and we discuss the 3rd installment of Nightmare World, his new web comic endeavors and he gives some advice for aspiring creators.