Death of Wolverine, the 2014 event comic from Marvel. Join Dylan and John as they discuss the good and bad points of this anticipated event. Did they include all the right pieces of Wolverine’s past? Was his death treated respectfully? Was it worthy of an event or should this have happened in his own title? We cover this and more in this episode of Arc Reactions Podcast. 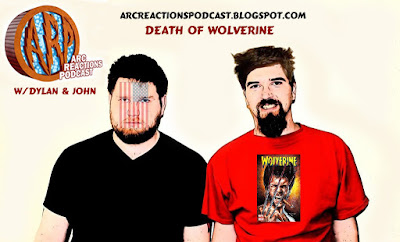 As mentioned in this episode:
ARP – 05 – ArmorWars

Our next episode will be the movie review of Ant-Man on July 19th.

This week’s episode sees Russ joined by Jeff Lemire, whose Sweet Tooth and Essex County books have made him an indie darling and whose Superboy bought him enough mainstream cred to position him as one of the architects of DC’s New 52 relaunch project. As the writer of the much-anticipated Animal Man #1, out today, and of Frankenstein: Agent of S.H.A.D.E. #1, due out next week. The pair talk about expectations, being excited about the DC relaunch and what “no events” really means.

In the second half? None other than Kyle Higgins, whose upcoming Deathstroke and Nightwing series will

help establish a pair of characters who have more years in the metahuman game under their belts than almost anybody, even in the new DC Universe. Will time and age amount to baggage, or will time as Batman simply help to bolster Nightwing’s confidence in his new/old gig?

Played for laughs is our intro music, Jello Biafra and Mojo Nixon’s “Nostalgia For an Age That Never Existed,” which is a reference to the fact that Dan DiDio seems to have suggested that Ted Kord, Wally West and Connor Hawke simply never were in this new timeline. And as a sendoff to the old DC Universe in our first new episode since the release of Flashpoint #5 and Justice League #1 last week, R.E.M.’s “It’s The End of The World As We Know It (And I Feel Fine)” plays us out.