This is the episode in which I talk about Conan Volume 1: The Frost Giant’s Daughter and Other Stories by Kurt Busiek, Tim Truman, Haden Blackman, Cary Nord, Thomas Yeates, Richard Starkings, and Dave Stewart

“When the internationally famous barbarian hero returned to comics, with an all-new fresh start by award-winning writer Kurt Busiek (JLA/Avengers, Astro City) and dynamic artists Cary Nord, Thomas Yeates, and Dave Stewart, the result was instant sell-outs and multiple printings to keep up with the demand. Now Conan’s earliest adventures are collected in a handsome 192-page collection. Catch all the action and savagery as he wars with the murderous Vanir, meets the Frost Giant’s Daughter, and is taken as a slave by the ancient sorcerers of Hyperborea! This top-selling new series faithfully expands on original author Robert E. Howard’s literary creation. Collecting issues #0-#6 and fourteen pages from issue #7 of the ongoing series.”

Most of this episode was originally published on January 13, 2019.

The theme song used in each episode is Night Drive by The Oldfield Victory. Find them and their music at theoldfieldvictory.bandcamp.com

Want to help support the show? You can do that in a number of ways:

First, just spread the word. Tell a friend, tell two friends, tell your father, mother, sister, brother, neighbor, coworker, plumber, and even the guy or girl who cuts your hair.

Beyond that you can support Steeven and the show for as little as a dollar a month on Patreon: www.patreon.com/steevenrorr

Or, if the idea of a monthly payment doesn’t appeal to you and you just want to throw the show a one time payment, visit ko-fi.com/steevenrorr and buy Steeven and the show a coffee for as little as $3, but as high as you want to go.

Ask me questions, tell me stories, lie to me, speak your truth, make suggestions, or even complain right here: feedback@steevenorrelse.com

Just Another Fanboy is a proud member of the Comics Podcast Network. Find it and more great comic book podcasts at comicspodcasts.com

Comic News Insider: Episode 830 is now available for free download! Click on the link or get it through iTunes! Sponsored by Dynamic Forces.

Jon Hoche returns to co-host! They talk about some of the genre trailers shown during the Super Bowl, the Nerdist podcast name change and Jimmy thinks Jon is Henry Cavill’s double. News includes: Brian Michael Bendis will be writing 2 Superman titles for DC, Amazon is developing a new Conan series, a Mario Kart game is coming to smart phones and more! Leave your iTunes comments! 5 stars and nothing but love! Also, get a hold of us!

Comic News Insider: Episode 827 is now available for free download! Click on the link or get it through iTunes! Sponsored by Dynamic Forces.

Jon Hoche is back as co-host and gives a few of his favorite picks from last year. They chat about a couple of comic fests that happened over the weekend as well. News includes: John Ridley will write The Other History of the DC Universe, a Detective Pikachu game is coming, the Dick Tracy comic reboot is cancelled over a licensing snafu and more! Leave your iTunes comments! 5 stars and nothing but love! Also, get a hold of us!

It’s landmark Episode 300 of the Wayne’s Comics Podcast! To celebrate, I’m sharing the great interviews I recorded at this year’s New York Comic Con with many great DC Comics creators, all of which took place from October 4 through the 7th! You’ll hear my chat with Marguerite Bennett from Batwoman and DC’s Bombshells followed by my interview with Flintstones creator Mark Russell. After that is Tim Seeley discussing Green Lanterns, Gail Simone from Wonder Woman/Conan, and Cecil Castellucci, who scripts Shade the Changing Girl, followed by James Tynion IV, who talks about Detective Comics and his new series working with Jim Lee. Next up is legendary creator Neal Adams and a writer new to the show: Ray Fawkes, who is launching a revisited Ragman, and then there’s a brief chat with Steve Orlando about Supergirl. Things wrap up with John Romita, Jr., talking about his upcoming projects with Frank Miller and Superman, among other things! Please note that I did have some slight technical trouble, so you’ll hear a crackle or two, but not often! As always, special thanks to Charlotte Sandler from BH Impact and the folks at DC Comics’ publicity! You’ll find the sequence and times you can hear each interview during the podcast below:

We cover Jeff by Travis Bundy and Chad Thomas in our second episode of follow up fall. We talk about the story, the characters, and interview the writer/artist. 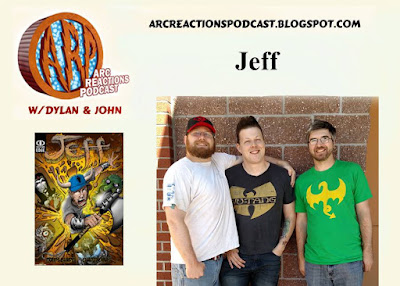 Our next podcast will be our review of  The Defenders (Netflix) on September 17th.

Comic News Insider: Episode 735 is now available for free download! Click on the link or get it through iTunes! Sponsored by Dynamic Forces.

Due to some sort of national duty of ours, no one is available to co-host so Jimmy flies solo.  But fret not, he recruits friends to send some audio reviews and read the news. Many thanks to Heidi, Marta, Emily, Rachel, Melissa and Dave for participating! He also had a chance to sit down with Rob Kutner at The Plaza Hotel to talk about his comic book Shrinkage, his podcast Runaway Brains and his work as a writer on The Daily Show and Conan. News includes: Marvel announced a Star Wars: Doctor Aphra comic series, DC announced a Captain Atom series and an Amazons series, IDW announced a Biff to the Future comic series, Red Dead Redemption 2 is coming next fall, Donald Glover has been cast as a young Lando Calrissian in the upcoming solo Han Solo film, Season 2 of Jessica Jones will have all female  directors, Cyborg Superman is coming to Supergirl, Young Justice season 3 is coming, a Time Bandits TV series is in the works, Michael Keaton is playing The Vulture in Spider-Man: Homecoming and more! Leave your iTunes comments! 5 stars and nothing but love! Also, get a hold of us!

Roland Mann has been a writer, an editor, a teacher, a speaker and, most importantly, a comics creator. In episode 181, we chat about his creations, including A Demon’s Tails, focusing on a character he made for Cat & Mouse, and Krey, the story of a barbarian human in a world with humanity and mutants constantly in a state of war. He shares many great stories about his experiences working in this crazy comics industry, but you’ll want to hear what he shares about Malibu being acquired by Marvel a while back! He just might clear up a thing or two about that event!