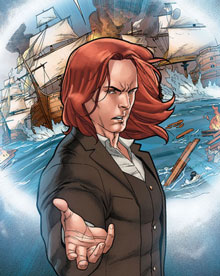 Time travel is a fascinating topic to many, and Fred Van Lente‘s current Ivar, Timewalker series from Valiant is timesurfing at both its most fun, and most scientific, with nods to Stephen Hawking’s writings on the subject. Van Lente did his own time jump to the past a couple years ago in The Comic Book History of Comics. This week Tim discusses both these works with him, along with Spider-Man, Archer & Armstrong, reassessing Frederic Wertham, and more.

On this episode of The Comics Alternative Interviews, Andy and Derek speak with writer Fred Van Lente. They begin by asking him about his work on the recent Dark Horse title, Brain Boy — a revamp of the short-lived 1960s character — and how he translated the title for a contemporary audience.

Van Lente also shares a bit of insight into his upcoming reboot of Magnus: Robot Fighter, part of Dynamite Entertainment’s new Gold Key line, as well as his plans for the new Action Presidents series. The Two Guys also talk with Fred about his run on Archer and Armstrong and the early humorous titles he created with Ryan Dunlavey, the comics that really put him on the map: Action Philosophers and The Comic Book History of Comics. They spend a lot of time focusing on Fred’s special sense of humor, his meticulous research, and his melding of abstract thoughts and tangible — and very entertaining — storytelling. All in all, Derek and Andy had a good time talking with the acclaimed author…and their conversation ended right when Fred needed to take his shepherd’s pie out of the oven. The Two Guys are  nothing if not timely!