Welcome to our new series we are calling Followup Fall. In this episode we return to Chew by John Layman and Rob Guillory. We covered issues 1-5 of this story in episode 28 of the podcast. Now we are returning to the series to cover issues 6-10 of the story. This is the first in our 3-part series where we return to stories we enjoyed and explore them further. 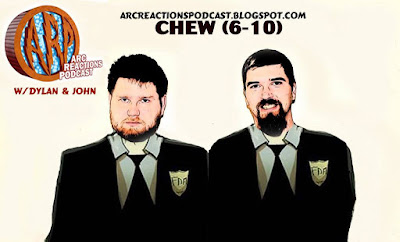 Our next podcast will be Bat Books For Beginners 145 – Batman: Family on Tuesday August 16th. Our next Arc Reactions episode will be Paralax Saga on September 4th.

Comic News Insider: Episode 702 is now available for free download! Click on the link or get it through iTunes! Sponsored by Dynamic Forces.

Jimmy was at San Diego Comic Con and all we got was this lousy t-shirt! It was a crazy busy time and he covered a ton of press rooms from Orphan Black to Supergirl to The Walking Dead. He also had a chance to do some 1:1s. You’ll hear him chat with the awesome Raina Telgemeier about her upcoming graphic novel, Ghosts, as well as her past work. Jimmy talked to Jeffrey Brown about the first book in his new series Lucy and Andy Neanderthal. He also talked to old buddy John Layman about the Predator vs Judge Dredd vs Aliens comic he’s writing as well as wrapping up his big hit Chew. And finally, you can sit in on Jimmy’s annual therapy session…uh…interview with psychologist friend Dr. Andrea Letamendi. They talk about the psychology of some recent superhero films and more! No news or reviews or Top 3 in this episode as he’s still recovering from it all. But you get a quick recap with some highlights!

Over the next few weeks, there wont be a regular format show. You’ll get a lot of special episodes covering the press rooms for Arrow, Animaniacs, Agents of SHIELD, The, Flash, Gotham, Supergirl, The Walking Dead, iZombie, Justice League: Action, The Powerpuff Girls, We Bare Bears, Teen Titans Go, Legends of Tomorrow, Orphan Black, Rick and Morty, Riverdale, Steven Universe, and Wynonna Earp. Special thanks to Kelly Bedard of My Entertainment World for partnering up and covering some of the rooms that Jimmy couldn’t cover.

Comic News Insider: Episode 616 is now available for free download! Click on the link or get it through iTunes! Sponsored by Dynamic Forces.

Jimmy’s down in his hometown of Jacksonville post-Heroes Con! As usual, he recruits old pal Ted and Superhero Beach Comic Shop Mgr Ashley Lanni-Hoye. Jimmy and Ashley give their Heroes Con recaps (GREATEST CON ON EARTH). Jimmy got 13 interviews and moderated 2 panels at Heroes Con. You’ll hear 4 of those interviews here! You’ll love the chats with Francesco Francavilla, Robbi Rodriguez, Angelina (ALB) and Bridgit Connell. News includes: Dark Horse Comics comes to Comixology, NBC cancels Hannibal, Kelly Sue DeConnick is leaving Captain Marvel but Tara Butters/Michelle Fazekas are taking it over, Doctor Strange will get a new ongoing series for the first time in 20 years, David Tennant joins the voice cast of the animated film Chew, Image hit comic Southern Bastards gets optioned by FX, Tom Holland is the new Spider-Man and more! Leave your iTunes comments! 5 stars and nothing but love! 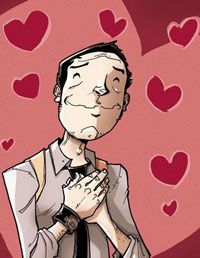 This week Rob Guillory joins Tim to give his side of the genesis of Chew (following on John Layman‘s side a few weeks ago), describe how he had trouble finding anyone who wanted him to draw in his own style, recall the shock of realizing that drawing could actually be a paying job, and more. 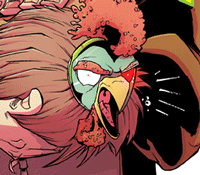 As John Layman and Rob Guillory’s Chew passes the 3/4 point, major characters (including badass galline fan favorites) get maimed and even killed — yet the story somehow retains a lighthearted tone! This week, John Layman (who’s also writing Cyclops for Marvel) talks with Tim about nonsequential storytelling, the one thing Rob Guillory can’t draw, Tiger Beat posters of Robert Kirkman, and much more.

Comic News Insider: Episode 590 is now available for free download! Click on the link or get it through iTunes! Sponsored by Dynamic Forces.

Jimmy is joined in studio by the podcast wife Erica Schultz! They chat about the rumored Spider-Man appearances in upcoming Avengers films and all of the problems the Fantastic Four film is having. News includes: Marvel announces the end of it all with Secret Wars, Image Comics offers a subscription service, Atomic Robo converts to web comic, Chew card game coming in May, Jane Goldman is working on the Fables movie script, the live-action Powers TV series will debut March 10, Best Animated Feature Films for the Oscars and Gotham gets renewed for a 2nd season. Leave your iTunes comments! 5 stars and nothing but love!

Dylan and John welcome Carl (owner of Tacoma Games) to discuss his favorite comic book, Chew. We chose to cover the first five issues entitled Taster’s Choice. This comic is a food themed take on the police procedural detective story. Join us as we discuss the good and bad things of this unique comic.

Join us on October 26th for our next story Punisher – Welcome Back, Frank from Marvel Comics.

Comic News Insider: Episode 539 is now available for free download! Click on the link or get it through iTunes! Sponsored by Dynamic Forces.

Jimmy flies solo this week so as not to make the episode too long. He forgets how long winded he is so the episode will still be LONG. Thanks to Producer Joe for the editing magic. However, it’s chock full of more TCAF (The Toronto Comic Arts Festival) goodness! Interviews with Box Brown, Eric Kim, Jesse Lonergan, and Rebecca Scoble/Lianne Sentar. News includes: DC to launch weekly digital first Wonder Woman series, Dynamite Entertainment announces new titles including Bob’s Burgers, Captain Victory, Terminal Hero and Steampunk Battlestar Galactica 1880, John Layman/Rob Guillory’s Chew coming to tabletop games, and Lumberjanes is going to a full series. Leave your iTunes comments! 5 stars and nothing but love!

Come back Friday for the Sports vs Comics panel that Jimmy moderated with Wai Au, Box Brown, Reinhard Kleist and Jesse Lonergan!

We are joined by John Layman to talk about how he go into comics from his days as an editor to making the successful and long running Image comic Chew. John shares some exciting things coming up with the Chew series as well as some cool foreshadowing of whats to come. Also we get into wrapping up his run on the DC Batman series Detective and his involvement in the weekly series Batman Eternal.

You can also hear the show on Stitcher http://www.stitcher.com/
This podcast is sponsored by

Join us on the forums at http://www.forumforgeeks.com

Mark and Zach’s “Twofer” podcast is great, so go check it out on the Blodcast network

We FINALLY get around to “Zooey Deschanel is a paedophile” story

Christian Children’s Entertainer acting very UN-Christian (or VERY Christian, depending on how you look at it)

–          The 4th Amazing Spiderman film could be focused on Spiderman villains namely, Venom

On this podcast we review “The Death of Everyone” conclusion in Invincible #100. Then we talk Rhino casting , Captain America 2, Chew and the DC Nation cancellations of Young Justice and GL: TAS. Listen in!

Does Robert Kirkman have an eye fetish? Head over to our podcast Facebook page and let us know. 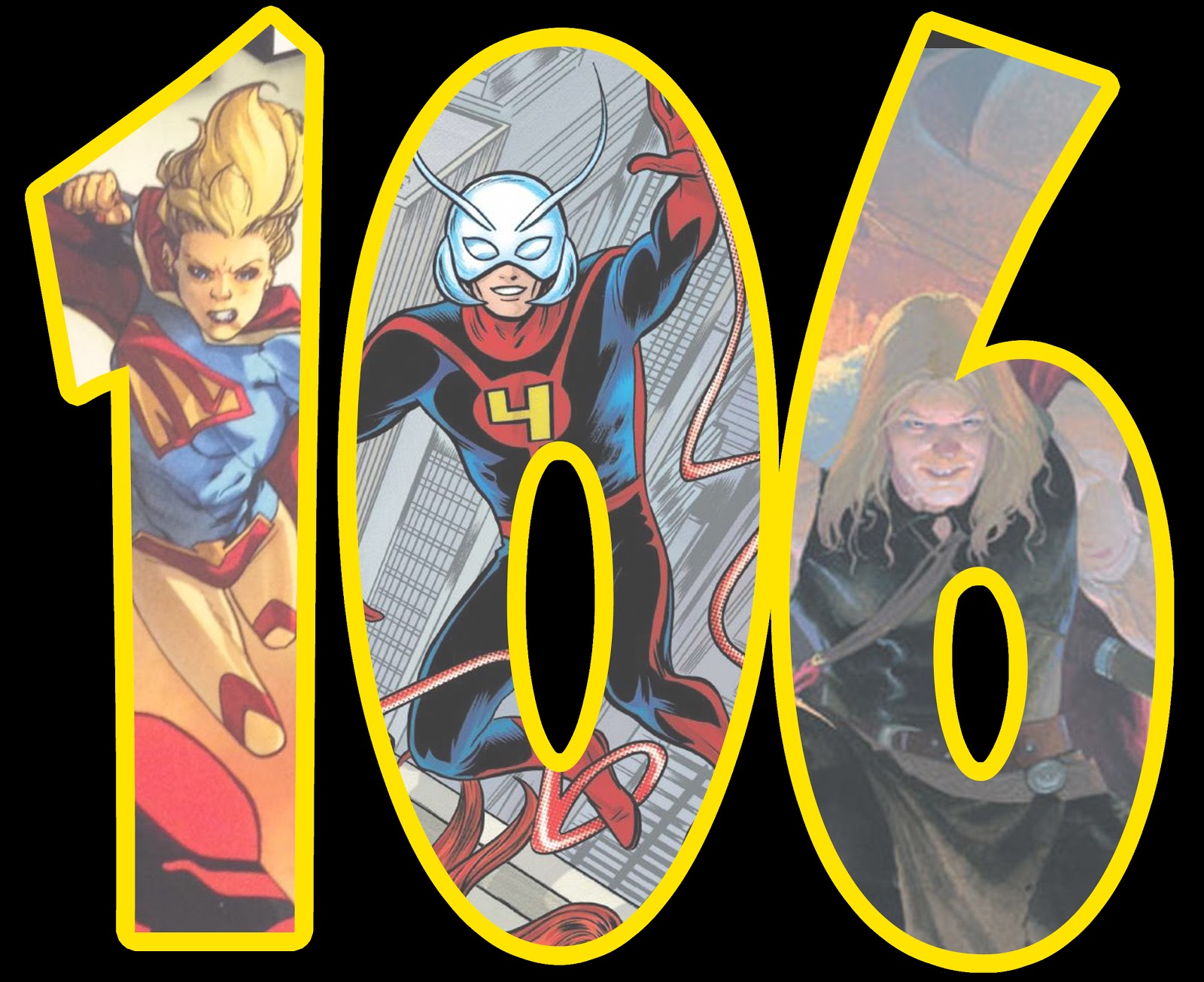 First, big thanks to the person who accidentally called the CBP voice mail line. Because of your fumbling fingers, we now have a great intro to the show.

This is a bit of a longer episode because Dan and Jared got into a discussion about awesome TV shows. After that, they talked about Supergirl #14, Uncanny Avengers #2, FF #1, American Vampire #33, Chew #30, Comeback #1 (of 5), Amazing Spider-Man #699, and Thor God of Thunder #2