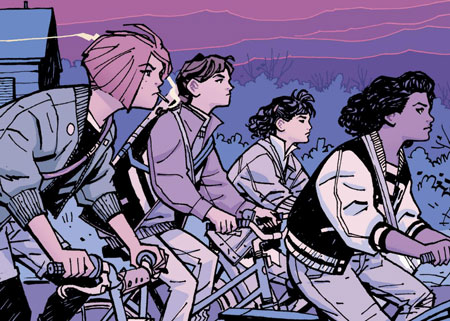 Paper Girls by Brian K. Vaughan and Cliff Chiang is the focus of this episode. Enjoy!

Comic News Insider: Episode 817 is now available for free download! Click on the link or get it through iTunes! Sponsored by Dynamic Forces.

It’s the last of the NYCC press room roundtables! Jimmy sat in on this one for Hulu’s new show Runaways based on the hit Marvel comics series.  You’ll hear from stars Lyrica Okano, Virginia Gardner, Ariela Barer, Allegra Acosta, Rhenzy Feliz, Gregg Sulkin and Producers Josh Schwartz, Stephanie Savage, Jeph Loeb! How close to the comic book source will the series be? What changes for the characters have been made? Will we be seeing a lot of Old Lace? Download it and find out! Leave your iTunes comments! 5 stars and nothing but love! Also, get a hold of us!

Doctor Strange: The Oath by Brian K Vaughan and Marcos Martin is our topic work for this oversized episode. We are joined by our friend Tobiah Panshin to talk about wizards, magic, the great Steve Ditko, and more. 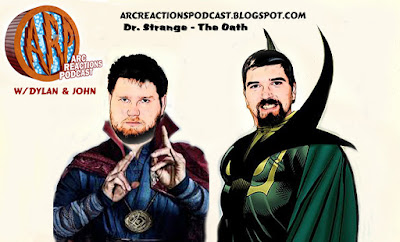 The relationship between science and magic (59:54)

Our next podcast will be Bat Books For Beginners 148 – Batman: Hush on Tuesday, November 15th. Our next Arc Reactions episode will be Rogue One (film) on December 18th.

SAGA has been described as STAR WARS meets GAME OF THRONES, which is a pretty amazing comparison considering those are two of the biggest franchises of the last 50 years–Thank goodness they didn’t put LORD OF THE RINGS in there too. However, I have to say that the story of Alana and Marko’s struggle to protect their forbidden child and love as they run across the galaxy is more than up to the challenge.

READ: Want to know more about SAGA? Check out our analysis of diversity in the most recent arc!

Told from the future in voiceover by Alana and Marko’s child Hazel, SAGA is the story of Alana and Marko’s struggle to protect their daughter from a world that wants to rip them apart. Why do they want to rip them apart? Because Alana is from a Landfall, a planet where the people have wings, and Marko is from Wreath, a moon of Landfall where the people have horns. These two people have been at war since anyone can remember. So long that the rest of the universe has even gotten involved and taken sides.

There are more creatures than I can name in this short post, but SAGA is more than just fantastical and beautiful creatures rendered gorgeously by Fiona Staples. SAGA is an epic story about the ways that cultures and prejudices clash. It is a story about the lengths that people will go to to protect their families. It is a story about pregnancy and the unexpected and pointless nature of death. SAGA is a story about life itself and what it truly means to live. In this podcast with guests Pete Imbesi, Matthew Murphy, Brad Sloan, and Phil Casey we discuss all this and more. So sit back and relax while ComicsVerse discusses Brian K. Vaughan’s and Fiona Staples’ epic space opera, SAGA.

For your convenience, this podcast is also available on iTunes!

This month for the on-location recording at Collected Comics and Games in Plano, TX, the discussion table is rather crowded. Derek is joined by many of the regular Collected customers — Craig, Matt, and Nick — but joining the conversation for the first time are Tristan, Chris, and Carrie, as well as Brian, the shop’s newest associate. The talk begins with Craig’s recounting of his own experiences at this year’s San Diego Comic-Com, but then it segues into a discussion of recent comics that folks have been reading. Some of those titles include Grant Morrison’s Klaus, Divinity II, Black Hammer, Backstagers, Giant Days, Voltron Legendary Defender, Fight Club 2, Black Panther, Wonder Woman, and various Brian K. Vaughan titles.  They also discuss several comics-related Netflix shows, DC’s upcoming Young Animal series, and writers in other media who have tried their hands in comics. Needless to say, this is a packed episode with a full table of participants and plenty of topics to go around.

The Dynamic Doctoral Duo is back for another action-packed episode promising thrills and chills! This time, Gwen and Derek begin by discussing Brecht Evens’s  Panther (Drawn and Quarterly), a book that gives a first impression of innocence but then becomes darker and increasingly disturbing as the story develops. Gwen is a scholar of children’s literature, and she points out that Evens follows many of the tropes found in picture books, and his style — what you’d find in his earlier works, The Wrong Place and The Making Of — may even lead readers to see this as one. But she argues that Panther is anything but a text for younger readers. Evens’s penchant for watercolor and his borderless panel style make this a most sophisticated narrative, one with no easy answers and ending in ambiguity.

Next, Derek and Gwen transition into yet another portal narrative, Gene Ha’s Mae #1 (Dark Horse Comics). In this new creator-owned series, which began last year as a Kickstarter, the titular character’s older sister, Abbie, has discovered a way into another world and often absents herself from her family. But Abbie’s fantastical getaway begins to insert itself into the mundane world, initiating events that are sure to carry the  homebody Mae into unexpected adventures. This is Ha’s first attempt at both writing and illustrating in a longer narrative form, and it’s a series that both cohosts plan on returning to in the months to come.

Finally, the two wrap up by doing something that has not yet been done on The Comics Alternative: reviewing a Walking Dead title. As much as Derek enjoys the popular comic-book series and the TV show, they’ve just never had the opportunity to discuss a beginning point or something standalone from Kirkman and Allard’s franchise. But this time, they have: Brian K. Vaughan and Marcos Martin’s one-shot, The Walking Dead: The Alien. This is available on the creators’ Panel Syndicate website, and as with the other titles you’ll find there — e.g., The Private Eye and Barrier — this is a pay-what-you-want comic. Gwen does not have much history with The Walking Dead, and she’s not a fan of zombie narratives, so she brings a unique perspective to the discussion…and likes what she reads. And as Derek points out, this is a title that will resonate with avid Walking Dead fans and at the same time can hold up outside of any larger narrative context. As if we needed any addition reason to love the creative team of Vaughan and Martin.

Comic News Insider: Episode 684 is now available for free download! Click on the link or get it through iTunes! Sponsored by Dynamic Forces.

Jimmy is joined in studio by frequent co-host Emily Edwards! They talk about their love of Prince before heading off to see Purple Rain in the theater (Emily’s first time!). News includes: The Inhumans movie has been pulled from its 2019 release date, Pearl Mackie will be the new Doctor Who Companion, an “outlandish” new Voltron: Legendary Defender comic mini-series is coming and will tie-in to the upcoming animated series, Guardians of the Galaxy 2 cast Nathan Fillion as Wonder Man, the new X-Men: Apocalypse trailer confirms the return of Wolverine, and Emma Stone has been cast as Cruella de Vil in upcoming spin-off film Cruella. Leave your iTunes comments! 5 stars and nothing but love! Also, get a hold of us!

Comic News Insider: Episode 667 is now available for free download! Click on the link or get it through iTunes! Sponsored by Dynamic Forces.

Jimmy is joined in studio by regular co-host Jon Hoche and newcomer/future foley artist Megan Bussiere! They chat some more Best of 2015 that they forgot about, Jimmy’s going to guest on another podcast and they focus on The Force before heading off to see Star Wars: The Force Awakens for the 3rd time (2nd for Megan)! News includes: Gene Yang named national ambassador for Young People’s Literature. Netflix will launch new Dreamworks Animation shows including Voltron, The Venture Bros. season 6 premieres January 31st, KaBoom! Studios is making Over the Garden Wall an ongoing series and the final hour long episode of Gravity Falls will air February 15. Leave your iTunes comments! 5 stars and nothing but love! Also, get a hold of us!

Comic News Insider: Episode 666 is now available for free download! Click on the link or get it through iTunes! Sponsored by Dynamic Forces.

It’s our Best of 2015! Jimmy sits down with The Beat’s Heidi MacDonald and good pal Jon Hoche to go over their 2015 favorites in comic books, TV and film. They didn’t read or watch everything released that year, so it’s just the Best of what they did read/watch. Fun discussions on great comics, their creators, TV shows, films, actors and more. What were your favorites last year? Leave your iTunes comments! 5 stars and nothing but love! Also, get a hold of us!

BKV Is in the House

The guys are pleased to have on their podcast the great Brian K. Vaughan. And for this conversation, Derek and Andy K. are joined by Andy Wolverton, who actually secured this interview for the show through his library connections. The guys begin by asking Brian about his thematic ambitions in Saga, and the discussion evolves from there. Over the course of their conversation, they ask their guest about the origins of the award-winning series, his melding of the sci-fi and fantasy genres, the challenges of juggling more than one ongoing title at a time, the stories behind the artists he chooses to work with, the pay-what-you-will philosophy behind The Private Eye, the future of Panel Syndicate, his loyal (and enthusiastic) fan base, the ever-evolving nature of comic conventions, and (as much as Brian can reveal) his new series that were recently announced at the Image Expo. Along the way they discuss not only his current titles, but also Brian’s ever-popular Y: The Last Man, Ex Machina, Swamp Thing, The Runaways, and The Pride of Baghdad. This is an exciting interview for the guys, and it’s a sign of the many great guests they will have on The Comics Alternative in the coming year.

Comic News Insider: Episode 589 is now available for free download! Click on the link or get it through iTunes! Sponsored by Dynamic Forces.

Jimmy is joined in studio by The Beat’s own Heidi MacDonald and frequent co-host/pal Jon Hoche! They dive in deep and have a lengthy/lively discussion on their 2014 favorites in comic books, TV, animation, film, video games and more. So much love shown to a lot of the people and things we loved in 2014. Did we leave anything out? You’ll have to tune in for that answer and let us know your picks of the year! We do cover some news as well that includes: Image Expo announces massive slate of titles to be released, Emerald City Comic Con partners with ReedPop, animated Vixen series coming to the CW Seed, and Kate Beaton’s new collection Step Aside, Pops will be released from Drawn & Quarterly this September. Leave your iTunes comments! 5 stars and nothing but love!