For this interview episode, the Two Guys with PhDs talk with Cullen Bunn and Brian Hurtt, the creators behind The Damned, from Oni Press. This is a series with some history, beginning back in 2006 with the five-issues run, “Three Days Dead,” and then the three-issue miniseries from 2008, “Prodigal Sons.” Soon after that, Cullen and Brian began The Sixth Gun, but now that that long-running series is behind them, they decided to revisit and revitalize their first creative project together. Over the course of their conversation, Cullen and Brian talk about their efforts to reprint the original comics in color — and with the help of the new series’ colorist, Bill Crabtree — the impetus behind the new on-going series, their work together on The Sixth Gun, and their process of collaboration on The Damned. Andy and Derek also ask them about some of their other projects, including Cullen’s Harrow County (with Tyler Crook) and Brian’s Poppy! and the Lost Lagoon (with Matt Kindt).

Andy and Derek welcome Matt Kindt to the podcast to discuss Grass Kings, published through BOOM! Studios, his two current ongoing series from Dark Horse Comics, Dept. H and Ether, and his voluminous work for Valiant Comics. The guys have been wanting to get Matt on the show for years, so this interview is a long time in coming. And the conversation is quite substantive. Among other topics, they discuss the geneses of these recent series; Matt’s strategies for juggling multiple storylines at once; his collaborations with Tyler Jenkins (on Grass Kings), David Rubín (Ether), and Brian Hurtt (Poppy! and the Lost Lagoon); the many titles he has written for Valiant Comics; his love of genre storytelling; the unique way he “signs” certain books at cons; and his creative direction after the groundbreaking Mind MGMT. This has to be one of the most prolific creators the guys have ever had on The Comics Alternative, and they come nowhere near covering all of the topics they wanted to discuss with Matt. But this is all the more reason to have him back on the show in the not-too-distant future.

Before they get to the books, Andy and Gwen both regret not being able to attend HeroesCon, but Gwen gives a brief (and very interesting) report from her recent experience at the Children’s Literature Association Conference in Columbus, Ohio. Who knows? Maybe the Two People with PhDs Talking about Comics for Young Readers will both be there next year?

Gwen and Andy are always excited to see more comics translated into English, and Kickliy’s Musnet: The Mouse of Monet is now available in French and English editions. Both enjoyed the leisurely storytelling and the wonderful use of color in this story of a mouse named Mus who longs to paint like a master artist. This first volume of a projected four-volume series introduces us to Mus’s world in Giverny, France, his teacher, his new friend Mya, and the world of painting. This book will appeal especially to young readers (ages 8 and up) who show an interest not just in painting, but in any of the arts. The look and pace of the book may take some getting used to for young readers, especially if this is their first venture into European comics, but the venture is certainly worth taking.

Next, Gwen and Andy discuss Bird Boy Volume 1: The Sword of Mali Mahi, which began (and continues) as a webcomic by Anne Szabla. This book (suggested for ages 8-12) contains familiar elements of quest/adventure stories, yet it has the feel of something both fresh and ancient. Szabla combines elements of myth and legend from a great many sources — Mayan, Norse, Northwest Native American, etc. — to tell the story of Bali, a 10-year-old boy

desperate to prove his worth to his tribe despite being small in stature. Although considered too little to participate in an important coming-of-age ceremony, Bali takes matters into his own hands and discovers a dangerous secret that’s been kept hidden for ages.

Gwen and Andy love the story and can’t say enough about the fabulous art and use of color, yet they wish that the creator and publisher had given readers some information about the cultural influences reflected in the book. (Perhaps they will in the second volume, which comes out later this summer.) Still, Bird Boy is an exciting, unique new series that the two look forward to exploring further.

Finally, Gwen and Andy could not stop singing the praises of Poppy! and the Lost Lagoon by Matt Kindt and Brian Hurtt. Although suggested for ages 8-12, this is a book that can be enjoyed and appreciated by much older readers…even those with PhDs! Ten-year-old Poppy Pepperton and her legal guardian Colt Winchester are explorers working for a 4,000-year-old Egyptian pharaoh with the body of an eight-year-old boy. The pharaoh sends Poppy and Colt on an adventure that would make Indiana Jones think twice, a story filled with danger, mystery, riddles, puzzles, a flying carpet, a mummy head that talks, a creature called a gigantipus, and more!

Poppy! is truly a book of wonder, reflected not only in characters we quickly come to love and care about, but also in its fantastic art and glorious use of watercolor. And although Poppy! is an enormously entertaining book filled with humor, it also speaks to issues of the environment and the preservation of natural habitats without getting preachy or didactic. It’s pretty safe to say this is one of Gwen and Andy’s favorite books so far in 2016. 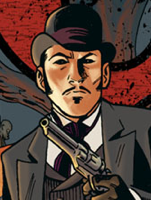 If you haven’t read The Sixth Gun, by Cullen Bunn and Brian Hurtt, you may think it’s just a Western. Well, it’s a 19th-century western U.S. setting, but the crux of the story is less “High Noon” and more “Hellblazer”. Tim is joined by Eugenia to discuss this ongoing Oni Press series. We also take note of Brian Hurtt’s source of photo reference, Shorpy.com.

We’ll also hear about what Eugenia‘s doing lately, and this weekend’s Comicdom Con!

Our guest this week is Cullen Bunn, writer of ‘The SIxth Gun’ from Oni Press. He has also written ‘The Damned’ and ‘The Damned: Prodigal Sons’ in 2007 & 2008, both from Oni and he is currently writing ‘Fear Itself: The Deep’ for Marvel comics where he has just signed an exclusive contract. He joins us to chat about all this plus; Sasquatch Wrangling, and serving his country as an Alien Autopsy Specialist. If you have a question for Cullen post it on our Facebook wall or give us a call in studio at 506-453-4949.
Also; New COmics Day at Strange Adventures and Opening Night at Empire Theatres.

The boys review not one, but two titles written by the great Scott Snyder.
Can life get any better? I submit to you it can not!

Get ready ladies and gentlemen, for the next hour and five minutes, it’s business time.

In which the gang bid farewell to Daytripper, get excited for a new beginning in American Vampire, and much more.

In which Jesse, Art, and Freddie discuss the long awaited return of The Stuff of Legend, the highly anticipated finale of X-Men: Second Coming, and the mindbending film that everyone is talking about…The Rock.