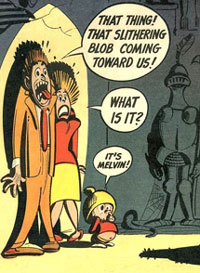 While early 1950s anti-comics hysteria eventually resulted in the cancellation of nearly all their books, EC Comics still had one thing going for them: MAD! Written by Harvey Kurtzman and drawn by some of the best comics artists of the age, this parody comic set the template for much that came after it. But can the humor still be appreciated today? What are we to think of some of the attitudes on display toward, say, women or certain ethnic groups? Tim and Kumar discuss.