All-Star Superman by Grant Morrison and Frank Quitely is the Poll List review plus random Doctor Who Series 11 speculation and revisiting the Master’s first appearance. Enjoy!

This episode originally appeared on GrawlixPodcast.com.

In this special episode, Cammy the elf once again helps you with some gift suggestions for that special geek in your life. New this year; I highlight Kids / Young Adult comics!

In this dynamic episode of the Why I Love Comics podcast, I, Eric Ratcliffe, am joined once again by none other than Russell Burlingame! As we discuss what makes a good story and many other things. Also, my phone rings and I have a one sided conversation with New Comic Day artist extraordinaire Chad strohl!

Next week, we may have a guest but if not…what fictional city would you live in and why?

And check out New Comic Day, my awesome webcomic: www.newcomicday.net!

Remember to join the Panel Discussions group at http://www.facebook.com/paneldiscussions and to follow Russ on Twitter at @RussBurlingame

ALL-STAR SUPERMAN, the animated straight to DVD movie from DC Comics and Warner Premiere, was released on February 22, 2011. Dwayne McDuffie, who wrote the script adaption of Grant Morrison’s and Frank Quitely’s comic book mini-series, unfortunately passed away on the previous day due to some complications from a surgical procedure.

This episode is mostly a spoiler free review of the movie, along with some of my views of its portrayal of the Man of Steel, compared with some other Superman films.

To read my reviews of the original comic book mini-series ALL-STAR SUPERMAN:

Drop me a line if you plan to attend MegaCon at the Orange County Convention Center in Orlando, Florida from March 25 – 27, 2011, and I look forward to meeting you there!

The theme of this podcast is PLANS IN MOTION, composed by Kevin MacLeod, and part of the royalty free music library at http://incompetech.com.

Superman and all related characters are trademark and copyright DC Comics. Any art shown on this podcast is for entertainment purposes only, and not for profit.

Episode 245: We dedicate this episode to the memory of Dwayne McDuffie. The focus of this episode is the very cool All Star Superman film that was released this week. We take a in depth look at the characters and themes throughout the film.

We’ll be back next week with our next episode. Check Ragingbullets.com and the forum for regular updates. 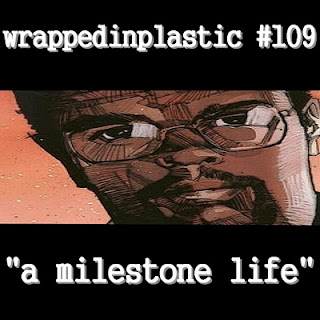 On this episode I celebrate the career of Dwayne McDuffie, talk trades and oscar predictions.
http://wrappedinplastic.podomatic.com/ In this issue Aitch, Smu, Elden and Kev talk about the passings of both Leslie Neilson and Invin Kirschner. Why is Marky Mark cast for Uncharted? The Whendon universe vents its fury at a Buffy reboot and more news you can use. In what’s tangling the webs the TSA has gone too dayumed far and there are more than enough parodies and real news articles that prove it.

In 1st impressions Kev sums up the first season of the Walking Dead series and Aitch gives his impression of the Young Justice premier on the CN. In comics reviews, Kev revies issue 49 of the Boys and Aitch reviews the Batman December 2010 One Shot. Also please listen to the PSA about coping through the holidays.

In this episode of Robot Sweatshop, join Dan and Chris as they discuss Street Fighter 4, Green Lantern comics, All Star Superman and Batman RIP.

But be sure to stick around until the very end. (See the title of this episode.)

Visit us online at RobotSweatshop.com

In this Best Of 2008, I discuss my Top 5 favorite Writers, Artists, Series, Top Story Arc, and Top Single Issue. Tell me how wrong I am on the forum!