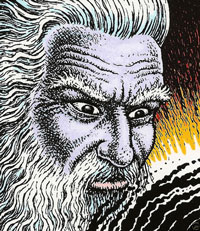 Perhaps one of the most puzzling comics releases in years was The Book of Genesis, Illustrated by R. Crumb. While it’s a virtuoso art performance, the exact purpose of the book was puzzling to Crumb fans (“It’s not a parody?!”) and religious readers (“This comic is not for kids?!”) alike. Both groups have been taken aback by how straight Crumb plays it — neither parodying nor bowdlerizing the work. Which is not to say that nothing in it is Crumb’s own interpretation. Tim and John discuss the issues raised — both by Crumb and by his audience.