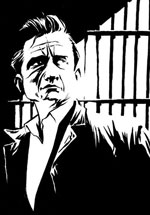 FLASHBACK! Though Asterios Polyp made the point that comics and (written) music are similar, doing a comic about music is not such an easy task. But Reinhard Kleist beautifully presents the music, and life, of a country music legend in Johnny Cash: I See a Darkness, recently released in English. How does it compare with the Cash biopic Walk the Line? Tim and Paul review.