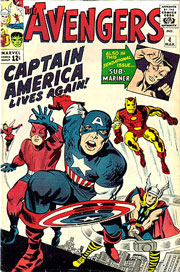 If you’re into American comics at all, you undoubtedly know how Stan Lee, Jack Kirby, Steve Ditko and others changed the industry with their work in the 1960s, and set the template for kinds of stories Marvel still publishes today.

That’s just part of the story that Sean Howe researched for his 2012 book Marvel Comics: The Untold Story. Through interviews, research of media reports, and of course tons of comics reading, Howe uncovered the backgrounds of many comics stories and rumors that longtime readers may have wondered about. There’s plenty of intra-creator acrimony to be found in its pages, yet Howe found that the book helped some of those involved to move on from decades-old wounds.

This week Tim talks to Sean Howe about the research, the reaction, and what this book has to say to aspiring creators.