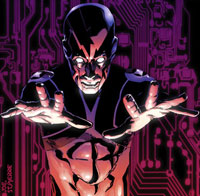 While the phrase “’90s comics” tends to elicit some eyerolls nowadays — Foil covers! X-men with huge guns and lots of pouches! — there was still some good comics work done in that era. What was it like to be in the business back then? Joe St.Pierre drew some Spider-man Clone Saga-related comics, so let’s ask him! (See his Marvel covers here)

St.Pierre’s work for Marvel back then springboarded him to storyboarding and commercial art gigs, but (naturally) he still loves doing comics. For the past few years he’s been publishing his Web comic The Liberaider through his site AstronautInk, and now he has launched a Kickstarter project to publish a hardcover edition. This week he talks with Tim about that and more.