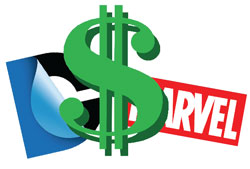 Tim Across America, part nine! When it comes to Big Two comics these days, there’s a lot to complain about. Marvel characters changed to look like the actors who play them in movies; nearly the entire DC line subsumed into a grim-and-gritty muck. And yet… we still like some of these books! Superior Spider-man, anyone?

In a cafe in Berkeley, California, Tim discusses this and more with three past guests who all live in the East Bay area, but had never previously met: Deb Aoki, John Roberson, and Jason McNamara! Conversation also swung to whether Image can eclipse the Big Two, comparison of black and white comics vs. color, doing a Kickstarter project for your comic vs. doing print-on-demand, and more!

Jason’s Kickstarter page for The Rattler