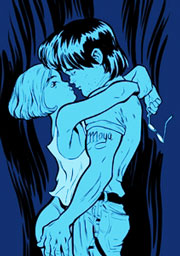 After Jeff Smith finished his fantastic all-ages series Bone, he went a completely different direction with his next series: a noir/sci-fi hybrid called RASL. It’s a great story on a human level, but it also gets into quantum physics, the lost journals of Nikola Tesla, and and some real-life pseudo-science conspiracy theories like the Tunguska Event and the Philadelphia Experiment.

Helping us dig more deeply into these elements of the story is a guest co-reviewer with solid footings in both comics and science: Ryan Haupt, an earth scientist in his own right and host of the podcast Science…Sort Of, but also a contributor to iFanboy and Marvel.com. Tim and Ryan also look at RASL as a comic, examining the many story points that Smith leaves vague, and the philosophical questions the story raises.