In this episode, Dylan and John discuss the most recent Bat family crossover event Death of the Family where the Joker returns in the New 52 after being gone for a year and he wants to break up the Bat Family.

Follow along with these notes and the discussion points:

Joker gets his face back (Batman 13)

Joker has a surprise for Nightwing at Amusement Mile (Nightwing 16)

Batman and Joker in Arkham (Batman 16)

Bat family at the dinner (Batman 17)

Simone writing Batgirl’s rage and dealing with her paralyzing and the man responsible.

Both Robin and Batgirl will break their rules to kill the Joker if given the chance. 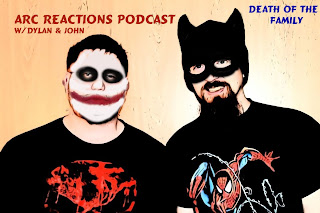 The next episode will be released on July 14th. Join us as we review the Phoenix and Dark Phoenix saga.