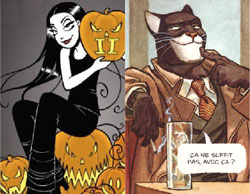 In more than seven years of doing this podcast, our coverage of European comics has been, um… underwhelming. This week, Tim tries to change that, discussing two European comics with European co-reviewers!

Then, the second Blacksad installment, “Arctic Nation”, by animators Juan Diaz Canales and Juanjo Guarnido. Is racism the point of this noirish “furry” tale, or is it just the framing device for something else? Eugenia Koumaki in Athens co-reviews with Tim.