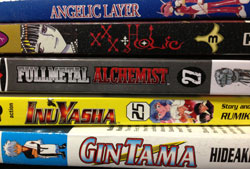 The 2000s have been thought of as a “manga boom” in the US. Well, that’s true in comparison to the ’90s, but North American manga sales have never come close to the numbers in Japan. Sales of manga — and books in general, have dropped the past few years, but there are signs that the market has stabilized.

Deb Aoki, who writes about manga for About.com, joins us again this week to discuss the reasons why publishers hesitate to put out new manga titles, why Jmanga died and Manga Reborn’s business model is imperfect, and what bright spots there are for the future.