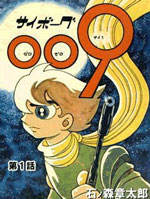 Shotaro Ishinomori was a very prolific creator of manga, a number of which became staples of live-action children’s TV, such as the Power Rangers and Kamen Rider. Many of his series deal with the relationship between technology and humans, and this week Tim and guest reviewer Deb Aoki discuss two such series, Cyborg 009 and Kikaider — both recently released in English via Comixology.