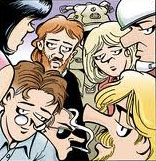 When Doonesbury started nearly 42 years ago, Garry Trudeau was a hot young property, the undergrad student cartoonist who spoke the language of “today’s youth”. Now age 64, Trudeau can hardly make that claim, but instead he can take credit for a monumental strip chronicling the lives of his many cast members and their lives growing old in the social and political environments of the late 20th and early 21st centuries. Tim and Kumar assess the strip’s legacy, discuss Brian Walker’s Doonesbury and the Art of G. B. Trudeau, and review the past year’s worth of strips.