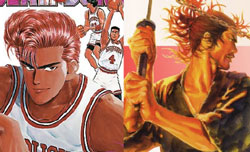 Takehiko Inoue’s Slam Dunk is easily mistaken for a serious sports manga. Pick it up, though, and you’ll find instead a hilarious ensemble comedy that just happens to involve basketball. Still, the series is credited with basketball’s 90s popularity in Japan, and led Inoue to create several other basketball-related series. But is oeuvre isn’t all hoops; he’s also the creator behind Vagabond, a sometimes-violent but intriguing take on the life of 17th-century historical figure Miyamoto Musashi. Tim and Kumar dig into both series.