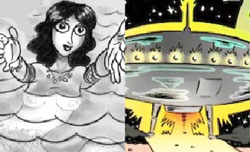 A mermaid, the Hudson River, and 19th century riverboats are the focus of Mark Siegel’s Sailor Twain, a Web comic with a thriving online community. Tim and Mulele discuss. (read an interview with Mark Siegel on CBR )