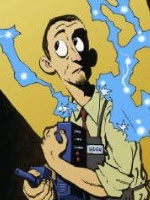 Doug TenNapel’s name is known in a wide variety of media in the U.S., from video games to animation to, of course, comics. His Neverhood game is worshiped by, among many others, our own Kumar. His graphic novels have won acclaim but also some controversy, in part because of the statements on spirituality that are made in some of them, such as Black Cherry, the most spiritual book that you’ll never see in a Christian bookstore. (Could it be the nudity and F-bombs?)

Coverage of Deconstructing Comics at The Comics Bulletin!