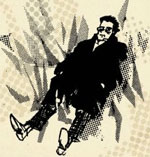 Eddie Campbell is best known to many as the artist on Alan Moore’s From Hell, but throughout his career he has been putting out book after book of his autobiographical Alec comics. In 2009, much of his Alec work was compiled into the massive Alec: The Years Have Pants omnibus. Kumar catches up with fellow Australia resident Campbell for a chat about Alec, The Birth Caul/Snakes and Ladders, From Hell, and more.

Coverage of Deconstructing Comics at The Comics Bulletin!