All four warriors are back in time for another exciting round of comic book ketchup. 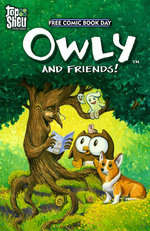