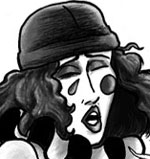 How do theatre and comics overlap? How have they influenced each other? How is an actor’s life similar to that of a comic creator? Tim covered some of this ground with Austin Tichenor in episode #159, but revisits this ground (with entirely different results!) with actor and comics creator John Roberson. A discussion ensues about Scott McCloud’s contention that comics become more universal when drawn more simply; John is “skeptical”.