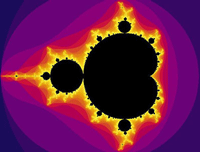 How often do you hear of two creators at the top of their medium, who set out to create their “magnum opus” and never complete it? Big Numbers is a famously unfinished comics project by Alan Moore and Bill Sienkiewicz from 1990. The theme of the project seemed to be chaos theory, symbolized by the fractal Mandebrot set (shown at right).

Meant to span 12 issues (or, rather, volumes, since the format is more paperback book than magazine), it only reached number two and then ceased publication. Rumors have flown since then about possibly existing third and fourth issues that never saw the light of day. Recently, new information has come out regarding the state of those unpublished episodes. Tim and Kumar sift through the rubble and speculate on just where Moore was going with this idea…

Part of the script of #3

On Eddie Campbell’s take (from Mindless Ones)

What Al Columbia did with Big Numbers #4 (from CBR)

1 thought on “Deconstructing Comics #270 “Big Numbers”: Adding it all up”