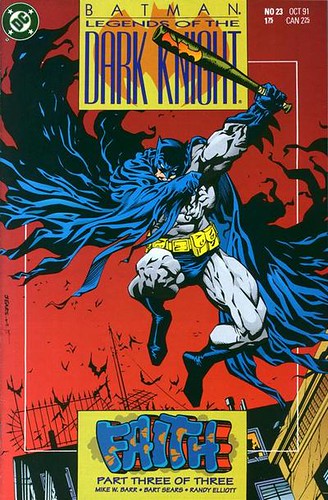 Welcome to the third installment of Back Issue Pitt!

Back Issue Pitt is just what it sounds like; we’ll be talking about an old mini-series or a run of issues for a title that we’ve never read before. It may be a story that was huge or one that no one’s heard of.

This BIP episode features Legends of the Dark Knight, #21-23. Written by Mike W. Barr, art by Bart Sears. You can win the comics discussed in this episode by leaving a new review on iTunes.

The Duke will be appearing at the Pittsburgh Comicon, April 23rd-25th.

The CMU Comics Club lecture series continues. Bill Boichel, proprietor of Copacetic Comics Company will be talking about Punk Culture and the Development of the Direct Market on Tuesday, April 27th.

Friend of CBP, Jim Rugg, will be speaking on Monday, May 17th at the Carnegie Library for Out of the Gutter, the Graphic Novel Discussion Group.

This episode’s music is by New Order.

Comic Book Pitt can be found on Facebook, Twitter, and iTunes. CBP is a proud member of the Comics Podcast Network.